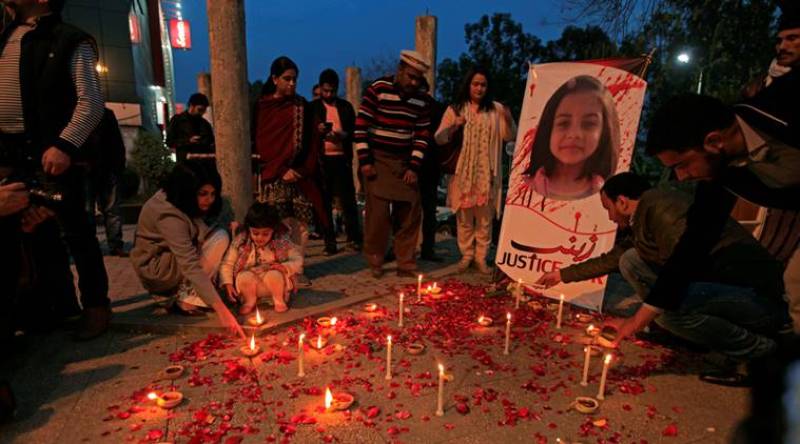 LAHORE - The parents of eight girls who had been raped and murdered in Kasur since 2015 have pleaded for justice while appearing before the country’s top court on Sunday.

A three-member bench, headed by Chief Justice of Pakistan Mian Saqib Nisar, was hearing a suo motu case on the rape and murder of six-year-old Zainab whose body was found in a trash heap on January 9.

"Give us justice," the parents pleaded before the SC bench during the hearing, which was conducted at the SC's Lahore registry.

During the hearing, the bench expressed its dissatisfaction over the progress of the investigation into Zainab's murder, the Dawn News reported.

"An unspeakable crime has been committed against an innocent girl," the bench remarked.

Muhammad Idrees, the regional police officer of Multan and head of the joint investigation team probing the case, submitted to the court a report on the investigations. He said that Zainab's case is the latest in eight similar incidents of assault and murder since 2015.

The bench remarked that if the police had taken the matter seriously in 2015, eight girls could have been saved.

When the RPO told the court that DNA tests of 800 suspects have been conducted, the bench remarked that the police are pursuing a one-track investigation and must widen the scope of the probe beyond simply using DNA testing to track down the culprits. "The DNA tests of 21 million people will have to be conducted if the investigations continue in this way," the bench said.

When asked by the chief justice, Zainab's family showed their satisfaction over the performance of a Joint Investigation Team (JIT) probing the case. "We pray that the team is successful [in it's probe]," they added.

The bench summoned the JIT and other parties in the case to appear in the court chambers for the next hearing.

What happened to Zainab?

According to the regional police officer, Zainab left her house to go to her aunt's house ─ located at a distance of 300 kilometres - for Quran lessons - on Jan 4. Her brother, Usman, would normally accompany her to their aunt's house but did not do so on January 4.

He added that when Zainab did not return home, her family began searching for her and informed the police at 9:30pm.

Zainab's body was recovered from a trash heap on Jan 9. The six-year-old's autopsy confirmed that she was strangled to death. It suggested that she had been raped before being killed.

The RPO told the bench that the culprit behind the seven cases of assault and murder of minor girls that preceded Zainab's is also responsible for this latest case.

No major headway has been made in the case since Zainab's body was found, despite the Counter-Terrorism Department, Intelligence Bureau, Special Branch and Punjab Forensic Science Agency each being tasked with investigating the case.