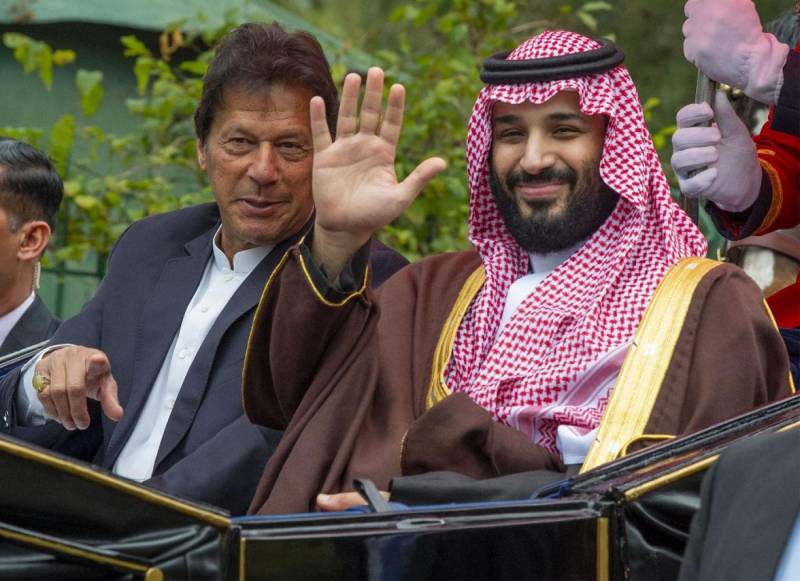 ISLAMABAD - Saudi Crown Prince Mohammed bin Salman (MBS) is the most popular foreign leader in Pakistan as he has taken bilateral relations to a new height, Federal Minister for Science and Technology Fawad Chaudhry said.

"Ever since Crown Prince Mohammed bin Salman took charge, he has taken the bilateral relationship to a totally different level," he said in an interview with Arab news.

During his visit to Pakistan in February 2019, the crown prince told Prime Minister Imran Khan: "Consider me an ambassador of Pakistan in Saudi Arabia." Chaudhry said the visit "was truly remarkable and memorable. Prime Minister Imran Khan hasn't visited any other country more than Saudi Arabia, and similarly the crown prince himself visited Pakistan with a large delegation." Every Pakistani government has enjoyed close ties with the Kingdom, Chaudhry said, adding: "It's a people-to-people relationship, and Pakistanis have a huge regard for Saudi Arabia." He said Saudi Arabia has stood with Pakistan through thick and thin, adding: "In all our challenges, the first country we've looked toward is Saudi Arabia, and the Kingdom was always there to help us. You can imagine from this the kind of respect both countries have for each other." Praising the crown prince's Vision 2030, Chaudhry said the plan is not only beneficial for the Kingdom but for the entire Muslim world.

"Vision 2030 has two dimensions. One is the domestic policy of Saudi Arabia and another dimension is the Muslim world, as to how we can shun the perception of extremism," the minister said, adding that the concept of Vision 2030 is based on education, knowledge, innovation, technology and science.

"It's about the cultural change that the crown prince wants to bring not only in Saudi Arabia but for the whole Muslim population, which indeed is a way forward," Chaudhry said.

"Pakistan really respects Vision 2030, and I believe it's actually a forward-looking agenda for Muslims all over the world," he added.

"In Pakistan, we've been through a tormenting war against extremism, where we've suffered greatly. No one can understand better than us the importance of getting rid of extremism. We need a cultural change and adaptation of the modern world, especially in science and technology. These are obviously fundamental elements for progress and that's demonstrated in Vision 2030." During Chaudhry's visit to Saudi Arabia last year, he met the crown prince and discussed cooperation in science and technology.

Chaudhry said amid the COVID-19 pandemic, there is a huge opportunity for the two countries to partner with each other.

"Pakistan has done wonders in the manufacturing of medical and protective equipment. We'd like Saudi investment and cooperation in this regard to further expand our capacity to manufacture medical equipment," he added.

Chaudhry expressed hope for an enhancement of bilateral cooperation in science and technology after the pandemic, especially precision agriculture, which uses satellites and drones to manage crops.

"We're way ahead than most other countries in precision agriculture, so we'd like to share our experience with Saudi Arabia," he said.