Abidi had used 'controversial' remarks against the top judge during an interview on July 2 in a show titled 'Subh Subh Pakistan' following which the cyber crime wing of the Federal Investigation Agency (FIA) registered a case against him.

The case lodged against the former senator would also identify the anchor who hosted the said show for a web television 'Naya Pakistan'. 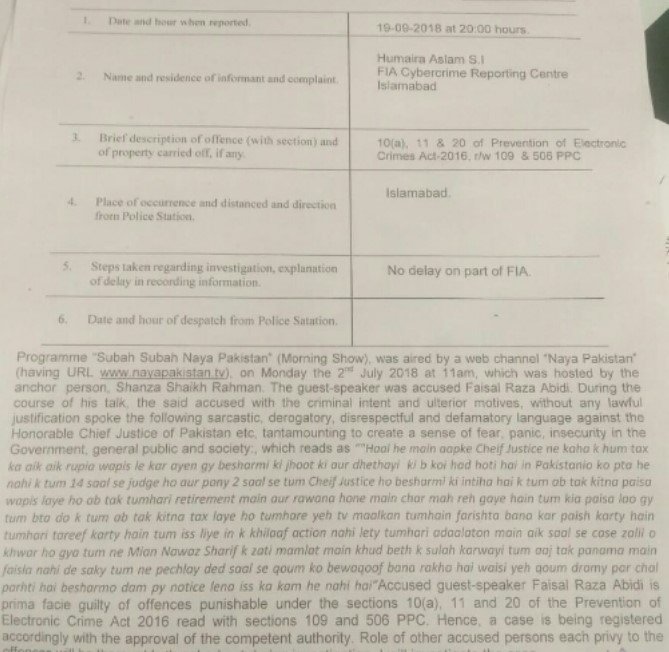 'Faisal Raza Abidi threatened the public through his commentary and hurled baseless allegations against the state institutions' states the complaint lodged against the firebrand politician.

Earlier this year, a contempt case was also taken up against Abidi by the Supreme Court.

A three-judge bench, headed by Chief Justice of Pakistan (CJP) Mian Saqib Nisar, had conducted the hearing of the contempt case and remarked that the channel, which aired anti-judiciary tirade of Abidi, should be ashamed.

The top judge had also ordered a contempt notice to be issued for the private TV channel which aired the comments of former PPP senator during a show.

The former senator was summoned after he used derogatory language against the former Chief Justice Iftikhar Muhammad Chaudhry on a private television channel.

Abidi served as the Karachi division president of the Pakistan Peoples Party but later stepped down from the post.

He recently resigned from the basic membership of Muttahida Qaumi Movement-Pakistan.