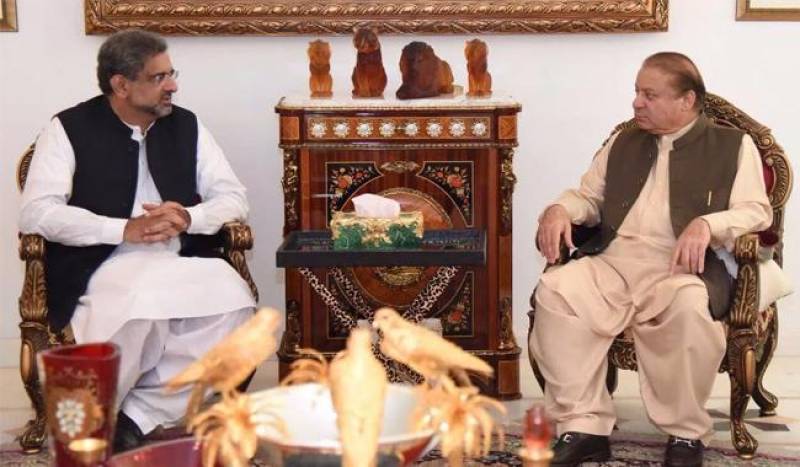 ISLAMABAD - Former Prime Minister Nawaz Sharif has reportedly raised concerns regarding the appointment of a retired judge or bureaucrat as the caretaker premier of the country.

It is due to the same reluctance shown by the former premier that Prime Minister Shahid Khaqan Abbasi and Opposition Leader in the National Assembly Khursheed Shah did not reach a consensus on any name in the latest meeting, on Tuesday.

According to well-placed sources, Prime Minister Abbasi has sought more time from Shah in an effort to cajole Nawaz Sharif over the appointment of the official who would oversee the next elections, Geo News reported.

Speaking to newsmen after the meeting, Khursheed Shah said another meeting would be held with the prime minister either tomorrow or on Thursday to unanimously decide the name for the interim set-up.

"It would be good for the Parliament if this matter can be agreed upon in [the upcoming] meeting," said Shah.

"If not, then [a committee] will be constituted, to which the names will be sent within three days and the majority decision will be [implemented]," Shah added.

ISLAMABAD - The incumbent government of Pakistan Muslim League-Nawaz (PML-N) and opposition in the National Assembly ...

According to sources, the government has suggested the name of Justice (r) Nasir-ul-Mulk, Justice (r) Tassaduq Jilani and Dr Shamshad Akhtar for the slot.

Nasir-ul-Mulk is a Pakistani jurist and the former professor of law who served as the 22nd Chief Justice of Pakistan.

Tassaduq Hussain Jillani is a Pakistani judge who served as the 21st Chief Justice of Pakistan from 2013 to 2014.

Dr Shamshad Akhtar is a Pakistani banker and economist who served as the Governor of the State Bank of Pakistan.

Pakistan's permanent representative to the United Nations Dr Maleeha Lodhi, who was earlier poised as among the favourites for the post, is missing from the list, sources said.

The ruling party’s five-year term is going to end on May 31.