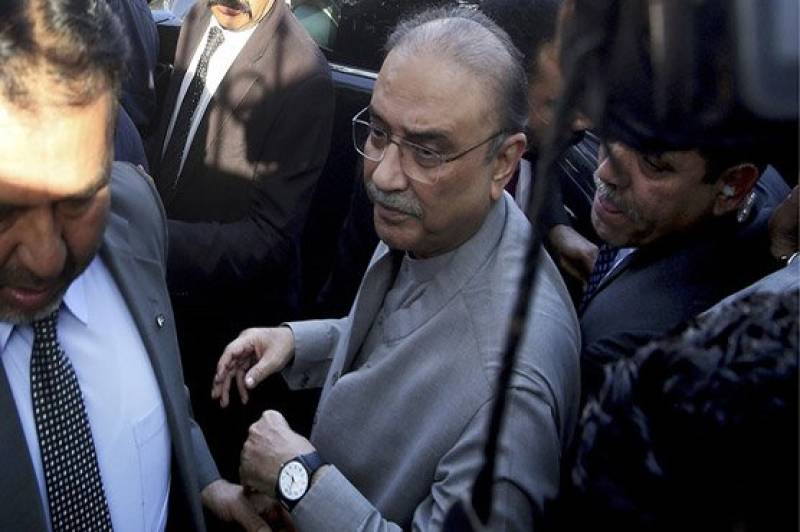 ISLAMABAD – An accountability court has extended the judicial remand of former president Asif Ali Zardari and his sister Faryal Talpur for their alleged role in fake bank accounts case till November 12.

On Oct 4, the court had extended their physical remand till today without indicting them in the same case.

During Tuesday's hearing, Accountability court Judge Muhammad Bashir directed the NAB officials to expedite their proceedings. Security Exchange Commission of Pakistan's (SECP) former director Javed Hussain who turned an approver against Asif Ali Zardari in the Park Lane Estate Company reference was also produced by the NAB officials before the court upon expiry of his physical remand.

During the hearing, the NAB's prosecutor argued before the court and sought physical remand of the approver to carry out further investigation in the case. At this, the court said that the suspect was in the NAB's custody. The NAB official said that it had been 49 days.

However, the court rejected the NAB's plea and sent accused Javed to jail on judicial remand.

Earlier, Zardari was shifted to PIMS hospital after a medical board suggested that the PPP co-chairperson be shifted to the hospital from Adiala Jail for his treatment as he was suffering serious illness.

On Monday, PPP Chairman Bilawal Bhutto, after visiting Adiala jail to see his father, said that the health of his father was deteriorating by every passing day and asked the government authorities to shift him to the hospital.

Last week, an accountability court turned down the request of former President Asif Ali Zardari seeing his shifting from jail to the hospital. The court rejected the request saying that it was not maintainable and asked the petitioner to approach the relevant forum.