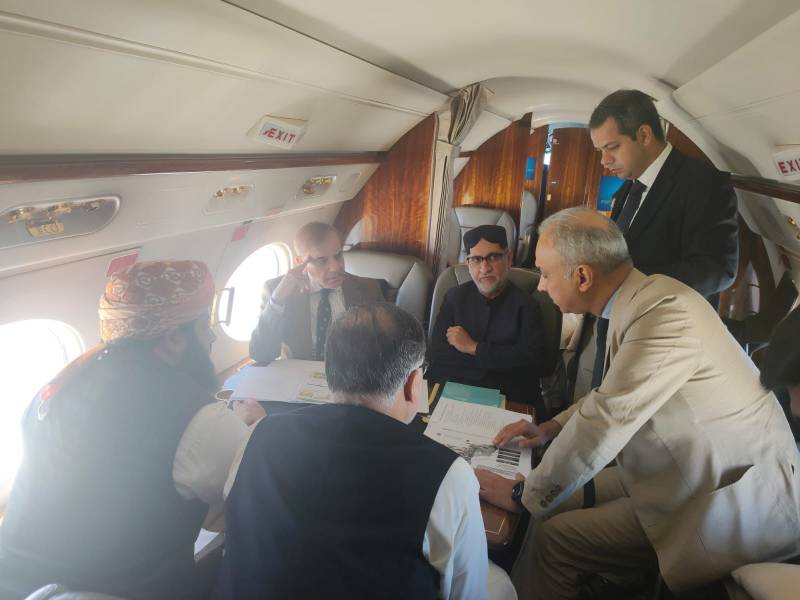 ISLAMABAD – Prime Minister Shehbaz Sharif on Saturday vowed to raise his voice for Balochistan's missing persons and said he would raise this issue with the "powerful quarters".

Speaking at the groundbreaking ceremony of the 330-km Khuzdar-Kuchlak sections of N-25 Chaman-Karachi National Highway, Sharif said, "I held meetings with the leaders here today and all of them said the same thing. They said that development projects are important, but it is the other problems, predominantly the issue of missing persons, that need to be solved first.

"Today, I'm making a promise. I will speak for missing persons along with you," PM Shehbaz vowed. "We will raise the issue with powerful quarters. And we will talk to them on the basis of law, justice and merit."

He stressed that it was important to raise the issue because it would otherwise create an air of "disappointment" and "sadness" in the province.

In his address, Shehbaz said he was "apologetic" to the people of the province.

"Balochistan is Pakistan's biggest province geographically, but despite having a small population, it was left behind.

"Allah has blessed the province with an abundance natural resources. But the benefits its residents got from these resources were equivalent to salt in flour," he regretted.

He said that Balochistan had huge potential but its natural resources remained untapped. "In fact the projects that were initiated here have been surrounded with litigations."

"Look at Reko Diq. It remained the subject of litigation for a year, and billions [of rupees] were wasted. Not just money, so many years were wasted," he pointed out.

From 2000 to 2014, the prime minister said, terrorism wreaked havoc in Balochistan.

"The sacrifices the Pashtuns, Baloch and other people made are exemplary. They lost their loved ones and buried them with their own hands and in front of their eyes," he said.

He praised the law enforcement agencies that gave "numerous sacrifices and defeated terrorism". He said that terrorism was again on the rise lately.

"I don't doubt that through our joint efforts we will defeat it again. If the nation stays united and takes [unified] decisions then no mountain or sea will become a hindrance in our plans."

However, there was one thing that was causing mounting difficulties for the people of Balochistan, the prime minister said. "This narrative of North and South Balochistan. Please destroy it."

He lamented that development was important for all areas of the province. "We have to move forward in every area of Balochistan and work there. Our aim is to throw resources and projects in every area that has been abandoned."

Talking about the Kuchlak National Highway, Sharif said the area the project encompassed was called "bloody road" by the locals. "We need to soak this blood and make this a road of growth and sustenance without any delay," he urged.

Of the 700 kilometer-long highway, the PM laid the foundation of its 300km section. He promised the project would be completed in 1.5 years, adding that several projects in Balochistan had faced a long delay because of incomplete pre-qualification of tenders.

"Everyone in the federal government knows that my aim is to save each and every penny of the government," Sharif said, emphasising "third-party validation" which kept quality in check.

He said the government was bringing the Benazir Income Support Programme to Balochistan and it would benefit 500,000 families.

"The only condition is that the money should go to families that will use it to send their children to school," he said. "We don't want to raise an army of beggars. We want to empower the youth to become independent as they are the future of the country."

Sharif also announced a high-end technical university for the province and promised to distribute laptops to students so that they carry those "instead of carrying weapons".

Earlier, Sharif arrived in Quetta for a day long visit for first time after assuming the office.

PM Shehbaz Sharif received Guard of Honour on his arrival at Chief Minister's Secretariat in Quetta.

He is accompanied by Federal Minister for Planning Ahsan Iqbal, Minister for Communication Maulana Asad Mahmood and Balochistan National Party chairman Sardar Akhtar Mengal on his visit to the capital city of Balochistan.

During his visit, he will lay foundation stone of dualization of Khuclak-Khuzdar Highway.

"He will chair a meeting to review implementation status of Ramazan pakcage. The price issues of edibles and law & order situation will also be discussed," the PM office said in a statement.