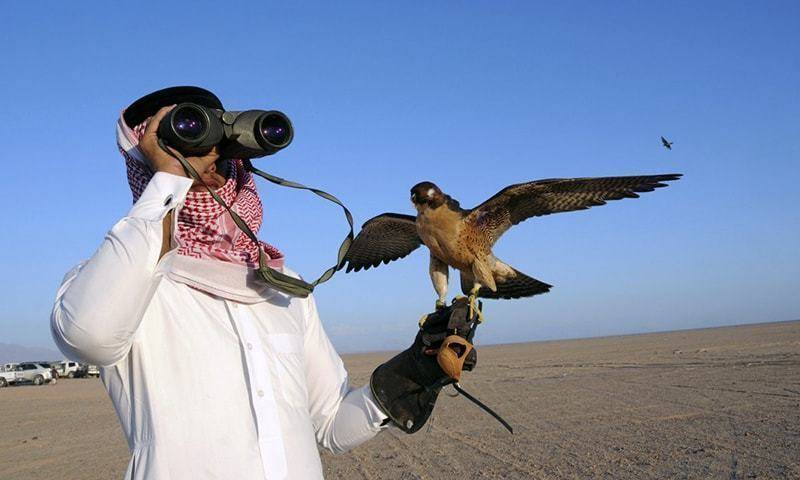 ISLAMABAD - The federal government has given a go-ahead to dignitaries of Bahrain, including King Sheikh Hamad bin Isa bin Salman Al-Khalifa, to hunt migratory bird houbara bustard in Pakistan.

The special permits which were also issued last year for the same family, would allow the Bahraini King and five of his associates, prominent of those are king’s uncle, the commander-in-chief of armed forces, the interior minister and the king’s adviser on defence, to hunt the internationally protected houbara bustard during the season 2017-18.

The foreign ministry’s deputy chief of protocol (P&I) Naeem Iqbal Cheema issued the permits through a letter No: DCB (P&I) – 19/6/2017-18 (Allocations/Bahrain) and forwarded it to the Islamabad-based Embassy of Bahrain so that these could be dispatched to the hunters residing in the Gulf island.

KARACHI - The federal government has given the go-ahead to dignitaries of Bahrain, including King Sheikh Hamad bin Isa ...

"The ministry of foreign affairs of the Islamic Republic of Pakistan presents its compliments to the Embassy of the Kingdom of Bahrain in Islamabad and has the honour to state that the Government of Pakistan has conveyed its recommendation to the authorities in the concerned province for the allocation of following area to Sheikh Hamad bin Isa bin Salman Al-Khalifa, King of the Kingdom of Bahrain, for hunting houbara bustard in Tehsils Thano Bula Khan, Kotri, Manjhand and Sehwan of Jamshoro district for the season 2017-18," states the letter.

“The respective provincial government has also been requested to issue the necessary permit in this regard. The code of conduct for hunting season for 2017-18 is also attached.” it adds.

The commander-in-chief of the armed forces of Bahrain, Sheikh Khalifa bin Ahmed Al-Khalifa, has been allocated Toisar tehsil of Musakhel district in Balochistan.

According to the code of conduct, which is frequently violated, a hunter can hunt 100 houbara bustards within a period of 10 days between Nov 1, 2017 and Jan 31, 2018 but through falconry only without using firearms.

The permit is person-specific and only notified hunter is allowed to hunt.

Besides, trapping, netting and taking of live houbara bustards, their eggs and chicks from their habitat and the bird’s trans-boundary export are also prohibited.

ISLAMABAD - The Finance Division on Thursday released Rs. 250 million for a 'Houbara Bustard and Migratory Birds ...

The Internationally migrated Houbara bustards migrate in thousands from Central Asia to Pakistan every winter, giving the Pakistani elite a chance to engage in “soft diplomacy”, as special permits are issued every year in order to allow affluent sheikhs to hunt the bird. This is in spite of the fact that houbara bustard hunting is officially banned in Pakistan.

The Pakistan Muslim league Nawaz-led federal government had also released Rs. 250 million for a ‘Houbara Bustard and Migratory Birds Endowment Fund’ upon the directions of the then Prime Minister Nawaz Sharif in 2016.