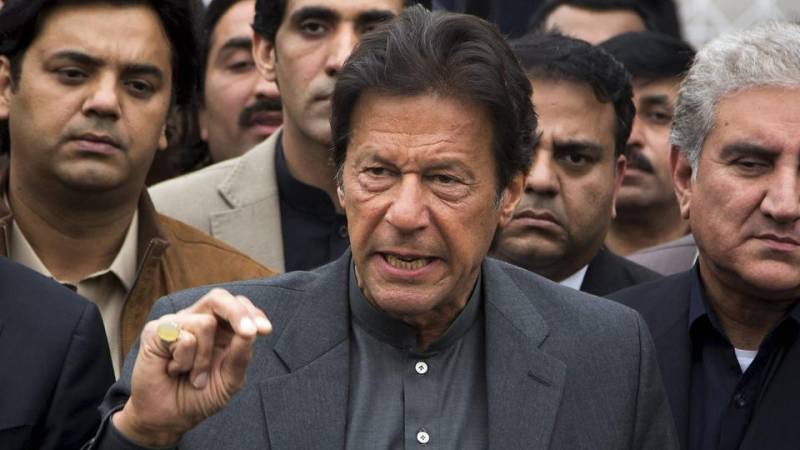 On Feb 15, Imran Khan had submitted two pleas to an anti-terrorism court seeking acquittal and exemption from appearance.

At the last hearing, Imran Khan appeared before the anti-terrorism court in Rawalpindi where Judge Shahrukh Arjumand took up a case regarding injuring SSP Asmatullah Junejor in an attack in Red Zone during sit-in. The judged had issued summons to Khan on Jan 31.

As the hearing began, the PTI chief had termed the cases undemocratic, adding that holding the public gathering was not terrorism. The ATC judge remarked that the cases will be handled according to law.

The judge also directed Khan’s counsel to give copies of the recent pleas to the prosecution.

The counsel for PTI chief pleaded the court to take up the acquittal plea before the indictment of his client.

The judge adjourned the case until Feb 26, saying the PTI head will have to appear in the court until exemption plea is accepted.

The anti-terrorism court is hearing four cases – attack on the state television building, Parliament and Junejo – against PTI and Pakistan Awami Tehreek leaders.

In August 2014, Khan and Tahirul Qadri took to streets in Islamabad against alleged rigging in 2013 general elections and Model Town sit-in. The protest had continued for 104 days.

During the sit-in, the protesters beat up SSP Asmatullah Junejo on Constitution Avenue when they attacked the Pakistan Television (PTV) headquarters and the parts of the Parliament.

A case had been filed against Khan, Qadri and others for torturing SSP Junejo and five other police officers.

It is to mention here that the PTI head pleaded the court to transfer the cases to civil court but the request was rejected on Dec 11, 2017.

Talking to media outside the court, Imran said that how terrorism cases can be filed against him as the 2014 protest was part of a political struggle.

Khan said that he did not need protocol as “I am a regular citizen”.