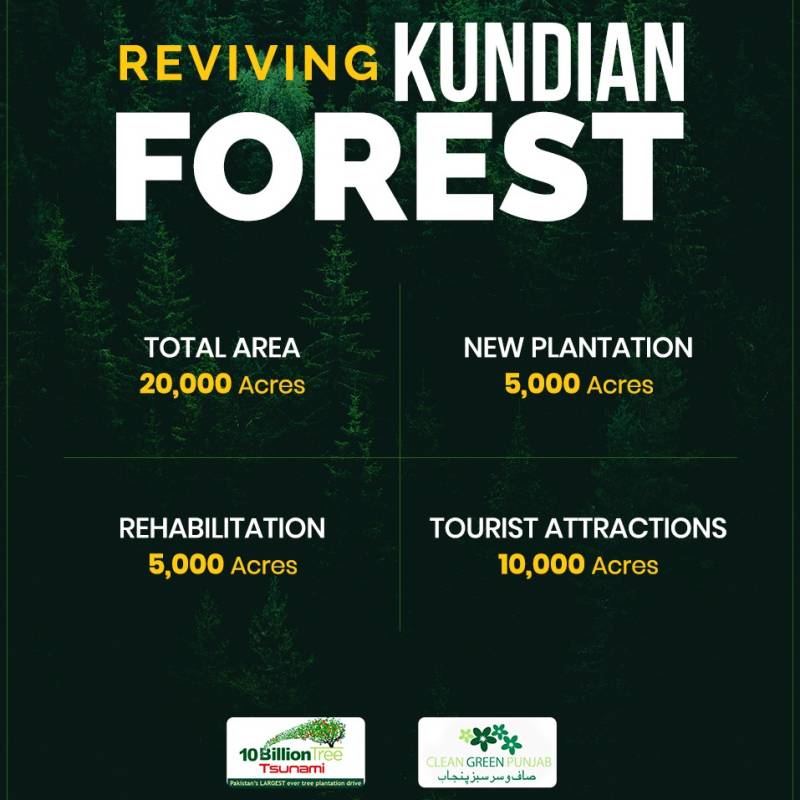 "The tree fellers are criminals. I ask Punjab government to treat them as criminals. Don't impose merely fine on them rather arrest them too. This is an offense not only against the nation but also our children," the prime minister said while addressing the inauguration ceremony of spring tree plantation at Kundian Forest here.

Of total 19,271 acres of forest area, around 5,000 acres has some green cover while rest 5,222 acres are barren and would be turned into forest by massive forestation during next four years under prime minister's 10 Billion Tree Tsunami Project.

Khan, who planted a sapling, asked the locals to guard the forest against tree fellers and land grabbers.

Under this spring tree plantation drive, 250 million saplings would be planted across the country with 1.3 million to be planted in one day as part of Plant for Pakistan Day observed on the day.

The prime minister said young generation particularly the children were required to be sensitized on the importance of trees and also called for its inclusion in the education curriculum.

He said unfortunately, the huge Kundian Forest, planted before partition, had been turned into a barren land owing to the apathy of the previous governments.

Prime minister, who also unveiled the plaque to launch the forest's revival, warned that anymore deforestation would destroy the nation's future.

He said being rich with diverse weathers and water resources, Pakistan should be exporting food to the world instead of facing the shortage.

PM Imran told the gathering that the revived Kundian Forest would provide job opportunities as human resource would be required to guard, water and nurture the plants and people would realize benefits of the forest in the near future.

He said biodiversity in the Khyber Pakhtunkhwa had revived following the success of one billion tree tsunami project.

He said a considerable number of berry plants would be planted in the forest which would help produce honey as many investors were awaiting to invest in honey production.

While assuring people to resolve the water issues of Piplan and Khattak Belt areas, he said Punjab government was striving to improve schools and hospitals and with the Punjab Police apprehending the big criminals who earlier used to enjoy protection.

Defending the huge spending on neglected Southern Punjab areas, the prime minister said no country could progress until it uplifted its backward areas.

He told the gathering that the Namal University was being developed as international university where the foreign students would also be coming for education.

Prime minister said the government was focused at developing Pakistan as an Islamic welfare state as had been envisioned by Quaid-e-Azam which should provide equal opportunities of health, education and rights to all the citizens.

In pursuance of the very vision, the government was providing Kafalat Cards to poor, interest free loans for business, 50,000 education scholarships, besides transferring assets to the poor in villages to boost their income.

Prime minister was also briefed on another project for improvement and restoration of Namal Lake of Mianwali.

Costing around Rs 188 million, the project would lead to the promotion of ecotourism, biodiversity and wetland research facility besides improving local livelihood and promoting architectural and cultural values.

In his address, Advisor Malik Amin Aslam said starting from Attock to Mianwali and Jhelum, a natural corridor was being established by developing multiple national parks.

Chief Minister Sardar Usman Buzdar said the government was committed to accomplish its vision of Clean and Green Pakistan.

He said from Attock to Rahim Yar Khan, Punjab government would plant 100 million trees this year and Rs26 billion had been specified for the billion tree program.

Punjab Forest Minister Sibtain Khan said Punjab forest department had planted 10.25 million plants in one year and nursery of around 50 million saplings was ready for plantation.

Moreover, around 357,000 saplings would be planted across Punjab on Sunday and the Forest Department would give jobs to 150,000 people this year.

He said government had also amended laws increasing fine for tree felling and Rs 0.5 million would be fined for the theft of Rs 0.1 million.