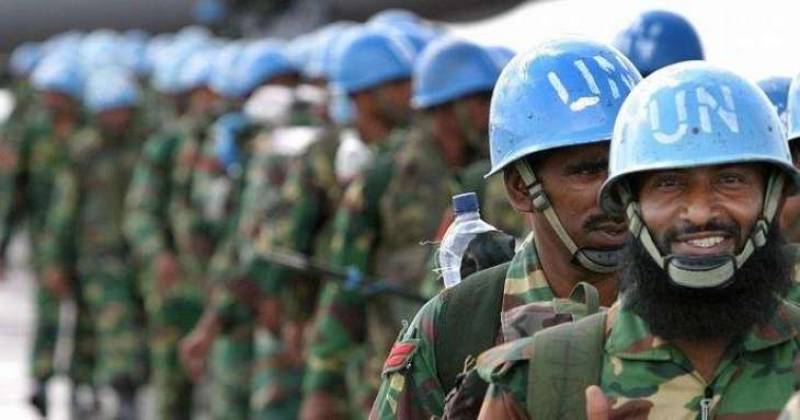 UNITED NATIONS – United Nations Secretary-General Antonio Guterres on Friday will preside over a special ceremony in New York at which the Dag Hammarskold Medal will be awarded posthumously to 119 military, police and civilian peacekeepers, including a Pakistani, who lost their lives in 2018 and early 2019, the UN has announced.

The ceremony, being held to mark the annual International Day of Peacekeepers, will take place after the UN chief lays a wreath to honour all the UN peacekeepers, who have made the ultimate sacrifice for the cause of peace since 1948.

Among the fallen peacekeepers to be honoured is Pakistan’s Naik Muhammad Naeem Raza, who served with the UN Organization Stabilization Mission in the Democratic Republic of the Congo (MONUSCO).

During the ceremony, the Secretary-General will award the “Captain Mbaye Diagne Medal for Exceptional Courage” posthumously to Private Chancy Chitete of Malawi.

The medal is named for a Senegalese peacekeeper, who was killed in Rwanda in 1994 after saving countless civilian lives. This is the first time the medal has been awarded since the inaugural medal was presented to Captain Diagne’s family in his honour in 2016.

Private Chitete served with the UN Mission in the Democratic Republic of the Congo (MONUSCO) and was killed last year while saving the life of a fellow peacekeeper from Tanzania, who had been badly wounded during an operation against the Allied Democratic Forces (ADF), which was aimed to stop attacks on local towns and to prevent the disruption of the Ebola response. His comrade survived, and Private Chitete’s heroism and sacrifice helped the peacekeepers achieve their objective of protecting civilians and forcing the ADF to withdraw from the area. Private Chitete’s family will receive the medal on his behalf.

The Secretary-General, in a video message to mark Peacekeepers Day, said: “Today we honour the more than one million men and women, who have served as UN peacekeepers since our first mission in 1948. We remember the more than 3,800 personnel, who paid the ultimate price. And we express our deepest gratitude to the 100,000 civilian, police and military peacekeepers deployed around the world today and to the countries that contribute these brave and dedicated women and men.”

Pakistan is currently the 6th largest contributor of uniformed personnel to the UN Peacekeeping. Currently, Pakistan contributes more than 5,200 military and police personnel to the UN peace operations in the Central African Republic, Cyprus, the Democratic Republic of the Congo, Mali, Somalia, Sudan, South Sudan and the Western Sahara.