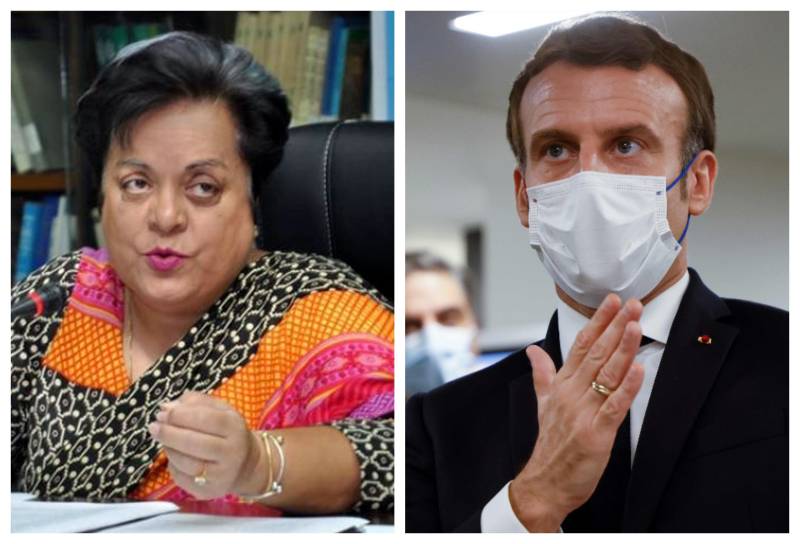 ISLAMABAD – The Foreign Ministry of France has accepted the clarification and apology provided by Pakistan’s Human Rights minister Shireen Mazari over her controversial tweet aimed at President Emmanuel Macron.

The French Embassy, in a tweet Monday, thanked Ms. Mazari and wrote that "freedom of expression and debates are essential in democracies, based on verified and accurate facts."

@ShireenMazari1 @ForeignOfficePk @GovtofPakistan
Thanks for the correction and your apologies. Freedom of expression and debates are essential in democracies, based on verified and accurate facts.
CLARIFICATION (09:46 GMT 22/11/20 ): (continued)

Earlier in a statement, French Foreign Ministry spokesperson Agnes von der Muhll said that on November 21, a member of the Pakistani Cabinet "expressed views through social media, in terms that are deeply shocking and insulting for the President of the Republic and for our country."

"These despicable words are blatant lies, loaded with an ideology of hatred and violence. Such slanderous comments are disgraceful at such level of responsibility. We reject them strongly," the statement continued.

"We have immediately informed the Chargé d 'affaires of Pakistan in Paris of our condemnation in the strongest terms. Pakistan must rectify this statement and return to the path of dialogue based on respect."

Any so-called information pertaining to alleged intent to register children being schooled in France based on religion, belief or origin, is absolutely false.

Mazari had commented that "Macron is doing to Muslims what the Nazis did to the Jews — Muslim children will get ID numbers (other children won’t) just as Jews were forced to wear the yellow star on their clothing for identification."

The article was however amended earlier on Sunday to reflect the fact that the idea, if implemented, would be applied to all children in France and not just to Muslim children.

In a follow-up tweet on Sunday, Mazari initially doubled down on her claims following a condemnation by France’s foreign ministry late on Saturday, which described them as “blatant lies, imbued with an ideology of hatred and violence”.

Read link 4 source of story - if fake then get retraction of story published which I gave as link @FranceinPak instead of calling my tweet "fake"! Btw why are nuns allowed to wear their "habit" in public places but Muslim women not their hijab? Discrimination, n'est ce pas? pic.twitter.com/C7ApMN92EJ

Later on Sunday, however, Mazari tweeted: “The article I had cited has been corrected by the relevant publication, I have also deleted my tweet on the same.”

The French Envoy to Pak sent me the following message and as the article I had cited has been corrected by the relevant publication, I have also deleted my tweet on the same. pic.twitter.com/mgOS5RFYwm

The incident follows anger in Pakistan over the republication of caricatures of the Prophet Muhammad (PBUH) by satirical French magazine Charlie Hebdo.

The images have sparked anger and protests in the Muslim world, especially in Pakistan.

Pakistan’s parliament at the end of October passed a resolution urging the government to recall its envoy from Paris, accusing Macron of “hate-mongering” against Muslims.

In early October, Macron made a speech in which he described Islam as a religion “in crisis” globally and said he would work against “Islamist separatism” in France.