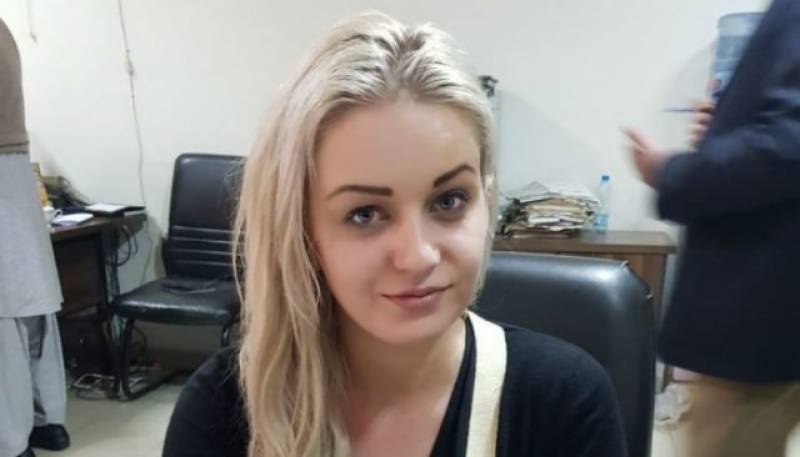 LAHORE - Officials investigating a Czech national, caught for smuggling heroin in Pakistan earlier this month, have failed to produce her before a magisterial court amid 'security concerns'.

Tereza Hluskova, 21, was trying to smuggle nine kilograms of heroin when she was arrested by Customs at Lahore airport. The 21-year-old model was travelling to Ireland via Abu Dhabi.

She was due in court as her 14-day judicial remand that ended on Wednesday. However, authorities could not produce her before the magistrate as the city police shied away from appearing in courts.

Cops in Lahore declared an unannounced strike following the botched police operation to control the violent clashes between student groups of Punjab University. Where the crackdown led to mass arrests, several city cops including the area SHO suffered multiple injuries.

Police officials at the court told Daily Pakistan that as there were a lesser number of cops available for security, the woman was not brought to the court.

Another possible factor behind the Czech drug mule's non-appearance could be the arrest and subsequent court appearance of Imran Ali, who was dubbed as Pakistan's most wanted criminal for raping and killing nearly a dozen children in Kasur.

Hluskova, who is currently detained in a Lahore jail, was to be presented before Magistrate Zafar Farid Hashmi. However, the Customs officials could only present a resident of Gujranwala, who is alleged to be the woman's facilitator.

The alleged facilitator, who was remanded for another fourteen days, maintained  Tereza Hluskova was sent to the country by his brother's friend.

After appearing before the judge, Shoaib told Daily Pakistan that he was asked by his elder brother to accommodate the Czech model and arrange for her photo shootout on the request of a British-Pakistani man, known as Tariq or Mr 'T'.

He also revealed that the woman has made several visits to the country in the recent past.

Authorities are yet to determine who handed over the drug-filled bag to the Czech model at the airport.

The deputy high commissioner of Czech Republic Embassy in Pakistan also reached the court to attend the hearing along with the counsel, Chaudhary Jawad Zafar. The diplomat declined to comment on the issue.

The court will take up the case on Jan 30.

Following her arrest, Tereza's custody remained a bone of contention for officials from three Pakistani departments – Customs, ANF and ASP. The situation aggravated to such an extent that officers from these departments carried out legal research leaving behind all the departmental work just to ascertain who could win the woman’s custody.

The woman is currently held at Kot Lakhpat jail under Section-9C.

As per the law, a person found guilty of smuggling over 10 kg of any prohibited drug is handed death sentence or life term in Pakistan. If found smuggling drugs less than 10kg in weight, a person can still face arrest up to 10 years. Drug smuggling is a non-bailable offence.