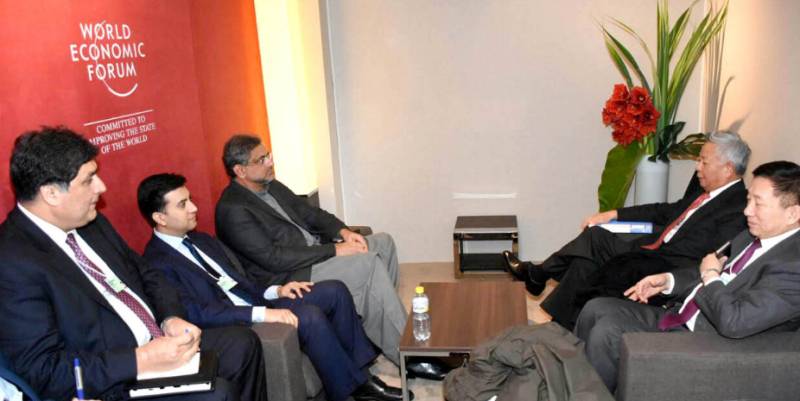 DAVOS - Prime Minister Shahid Khaqan Abbasi says socio-economic integration and uplift of FATA is a major priority of the government. He was talking to President of Asia Infrastructure Investment Bank (AIIB) Jin Liqun at World Economic Forum (WEF) in Davos on Wednesday.

The prime minister emphasized that funding water storage dams in FATA region will help in reintegrating and uplifting the region seamlessly.

He also sought AIIB's support for implementation of some of shovel ready projects in water conservation, infrastructure and energy sectors.

PM Abbasi reiterated that Pakistan was AIIB’s most enthusiastic supporter in its early stages and expressed the hope for building a strong and sustained relationship. The prime minister invited President AIIB to visit Pakistan.

AIIB is a multilateral development bank that provides financing support for infrastructure and regional connectivity.

It has a capital of 100 billion dollars and Pakistan is one of the founding members of the bank.

Pakistan has a seat on the Board of Governors and AIIB has co-financed two projects worth 400 million dollars in Pakistan.