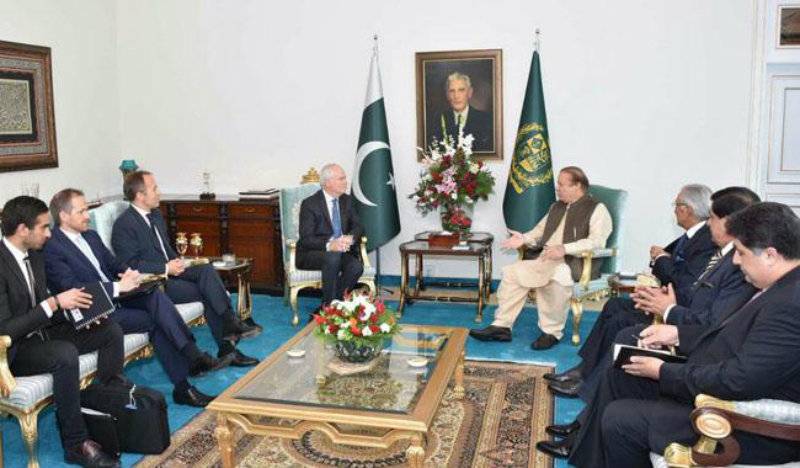 ISLAMABAD - Kashmir issue must be resolved according to the UN resolutions as per the commitments made by the Indian government, Prime Minister Nawaz Sharif said during a meeting with Sir Mark Lyall Grant, National Security Adviser, United Kingdom.

“Pakistan is peace loving country and pursues the policy of maintaining friendly relationships with all its neighbors,” the PM said during the meeting at Prime Minister Office on Monday.

Welcoming the UK’s national security advisor, Nawaz Sharif said that the issue of Indian Occupied Kashmir (IOK) is the core issue between India and Pakistan and its resolution would ensure durable peace in the region.

Paying rich tributes to the sacrifices made in the war against terrorism, Mr. Grant commended the government for achieving substantial successes in this war.

The NSA acknowledged the huge sacrifices made by the armed forces, police and other law enforcing agencies of Pakistan in the war against terrorists.

He said that the commitment of political government and armed forces, supported by the people of Pakistan have resulted into phenomenal victory against terrorism.

“It is exceedingly positive to learn from DFID that Pakistan is showing remarkable improvement in the health and education sectors,” added the NSA.

He appreciated the PM’s policy of reaching out to the neighbor countries for establishing cordial relationships with them. “We encourage and support your efforts for peaceful cooperation with your neighboring countries,” added the NSA.

PM Nawaz, on the occasion, highlighted it is high time that long standing issue of IOK is resolved as per the aspirations of the people of Kashmir; guaranteed to them by the UN resolutions.

“More than hundred innocent people have been brutally killed, hundreds have been blinded by the use of pellet guns while thousands have been injured in the last few months alone,” Nawaz said, stressing that the world community must take a note of the grave human rights violations and atrocities committed by Indian forces in the Indian Occupied Kashmir.