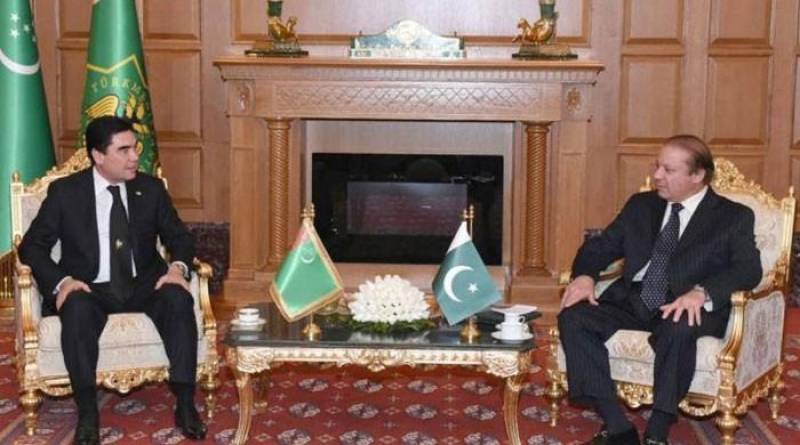 ASHGABAT - Prime Minister Nawaz Sharif, who is on a two-day visit to Turkmenistan, met Turkmenistan’s President Gurbanguly Berdimuhamedov on Friday and discussed matters of bilateral interests.

The two sides discussed matters related to Turkmenistan-Afghanistan-Pakistan-India (TAPI) gas pipeline and re-establishing of air links between their countries, a statement from the PM House said.

Prime Minister Nawaz Sharif said China-Pakistan Economic Corridor (CPEC) would usher in a new era of prosperity in Pakistan and in the entire region.

He said the future of the region's population was linked with CPEC, adding that Pakistan would welcome if any country was interested in joining this mega project.

PM Sharif said TAPI was a significant project which would help in meeting the energy needs of its member countries.

He said the bilateral relations between Pakistan and Turkmenistan were getting stronger with each passing day and proposed holding of a high-level meeting every year in Islamabad and Ashgabat.

Turkmenistan's President Gurbanguly seconded Prime Minister Nawaz Sharif on the importance of the CPEC terming it a project that would guarantee the region's progress and prosperity.

He lauded the vision of Pakistan premier in taking solid steps for strengthening Pakistan's economy and ensuring uplift of the people.

Earlier the prime minister arrived here in Turkmenistan's capital Ashgabat to lead the country's delegation at the first ever Global Conference on Sustainable Transport.

The prime minister is accompanied by his Adviser on National History and Literary Heritage Irfan Siddiqi and Special Assistant on Foreign Affairs Tariq Fatemi.

PM Nawaz Sharif is undertaking the visit at the invitation of the president of Turkmenistan who is co-hosting the conference along with United Nations Secretary General Ban Ki Moon.