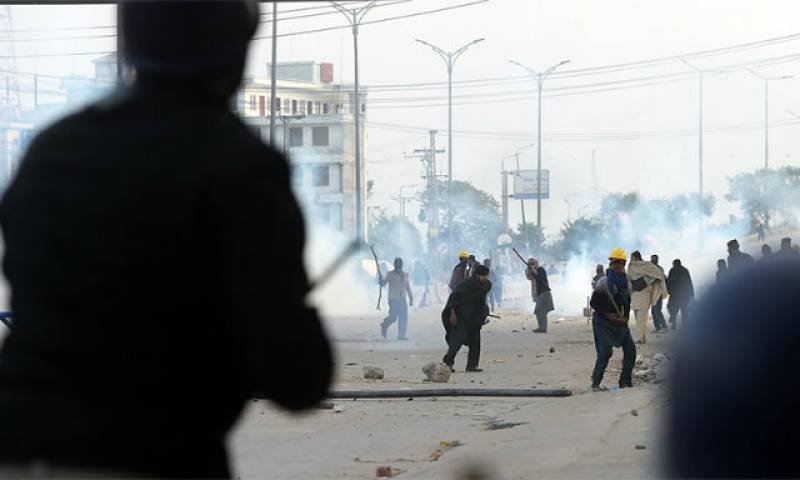 KARACHI - Protests erupted on Saturday soon after Islamabad police, with the help of Frontier Constabulary personnel and other law enforcement agencies, launched a crackdown against protesters camped out at the Faizabad Interchange since November 8.

The crackdown was launched after the last of a long series of deadlines lapsed on Saturday morning without response from the agitating parties.

All roads to Islamabad have been blocked. Khanapul has also been blocked by protestors #FaizabadDharna pic.twitter.com/nB8Vl50vaJ

In the Sindh capital, protesters who had been staging a sit-in at the Numaish Chowrangi since morning shut down all the leading roads in the area and forcefully closed all the shops. Meanwhile, protests have also sprung up in various other parts of the city.

Meanwhile, a video shared on Twitter shows announcements are being made in local mosques of Rawalpindi for people to reach Faizabad interchange.

Didnt get the whole video but announcements are being made in local mosques of RWP for people reach Faizabad Dharna. pic.twitter.com/r6u3IGXfjY

Lahore's Mall Road was also blocked, and all shops shut down after lawyers staged a rally in favour of Islamabad sit-in.

Earlier today, a policeman was martyred and several others injured as clashes with protesters turned violent after an operation to clear Faizabad interchange commenced early Saturday morning.

Dozens of protesters have been detained as they continue to resist and throw stones at security officials. Over a hundred have been reported injured due to the clashes, including dozens of policemen and FC officials.