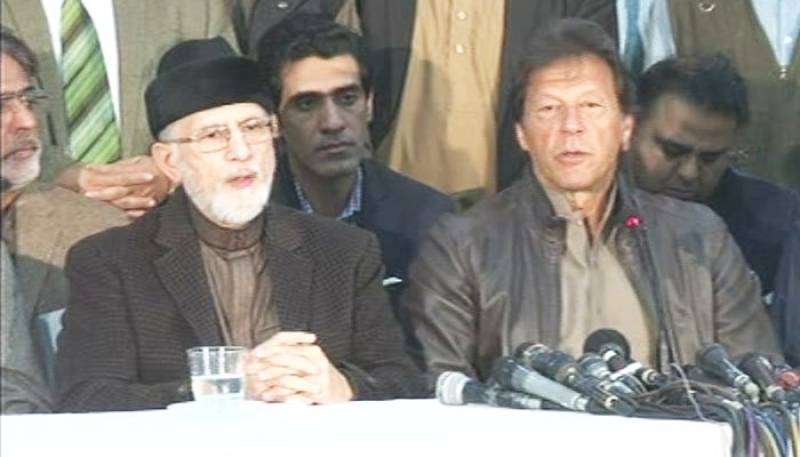 LAHORE - Pakistan Tehreek-e-Insaf Chairman Imran Khan and Pakistan Awami Tehreek (PAT) founder Dr. Tahirul Qadri in a joint press conference on Tuesday stated that they will mutually devise a strategy to tackle the Model Town issue during an All Parties Conference (APC) scheduled for December 30.

The Punjab government, at the behest of Lahore High Court, made the report for the Model Town incident public on December 5. The report was drafted by Justice Baqir Najfi and called the 2014 tragedy in Lahore's Model Town the "most unfortunate incident" in the country's history.

"I came here today with my team to reassure PAT and Qadri that our party and the people of Pakistan are with them," Imran said while addressing a joint news conference alongside the PAT chief. “Whatever decision PAT takes, PTI will stand alongside it.”

He added that the tragedy of Model Town is not only PAT's issue, but it is an issue for the people of Pakistan.

The PTI chief criticised Nawaz, saying the latter was brought to the forefront by a dictator but is worse as “they are a mafia”.

Dr. Tahirul Qadri also mentioned Justice Baqar Najfi's report on the Model Town incident, saying: "The Justice Baqar Najfi report has made it clear that Shahbaz Sharif never told the police to disengage. That much is not for debate anymore. Has it ever happened in the history of mankind that a police force of thousands is killing people and not even one person is behind bars?"

"One brother went out over Panama and the other one will go over the Model Town massacre," he declared.