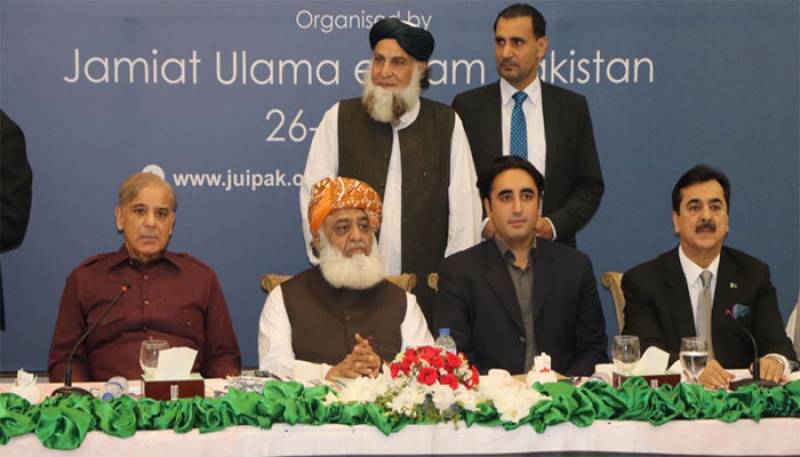 Baloch National Party-Mengal did not attend the opposition huddle.

According to a communique issued after the huddle, the opposition sensed the sovereignty of the country in danger owing to the decisions made by the incumbent government.

'The ruling PTI has been imposed on the public after worst electoral rigging,' stated a press release issued after the meeting.

'Faltering economy, social anxiety and foreign debts have accumulated to challenge the very existence of the country,' the communique stated.

Members of the opposition parties expressed their fears that as time passes, foreign debts would mount further, foreign currency reserves would be declined and exports would see a downfall to provide an opportunity to anti-state elements, dent the national interests.

The opposition parties observed that the country is being weakened on the economic front intentionally through a well-planned strategy, however, added that the parties would bolster the state institutions for protection of strategic assets and China Pakistan Economic Corridor (CPEC).

Members of the opposition also took aim at the regime for flouting diplomatic norms during international conferences, calling upon the regime to beg apology for hurting the sentiments of public on issues related to religion.

On June 26, Maulana Fazl-ur-Rehman announced to host an APC.

The conference will host the representatives of opposition parties at Islamabad to formulate a joint strategy for future course-of-action against the ruling Pakistan Tehreek-e-Insaf (PTI) government.

The opposition parties will also mull over on the change of Senate Chairman Sadiq Sanjrani, preventing the budget from getting passed from both houses, anti-government movement and a possible lockdown of the capital city in the APC.