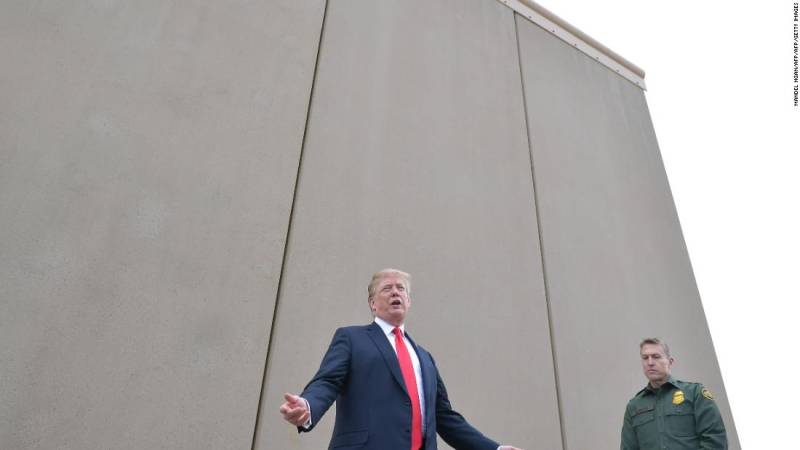 WASHINGTON - Acting Pentagon chief Patrick Shanahan has approved $1 billion to build part of the wall sought by US President Donald Trump along the Mexican border.

The funds are the first under the national emergency declared by Trump to bypass Congress and build the wall he repeatedly pledged during his election campaign though his arch rivals Democrats are against the fresh funds' transfer.

The funds will be used to build about 57 miles (91km) of fencing with 18-foot (5.5-meter) height and will cover road improvements and new lights as well.

A Pentagon statement said Patrick Shanahan had "authorised the commander of the US Army Corps of Engineers to begin planning and executing up to $1bn in support to the Department of Homeland Security and Customs and Border Patrol".

WASHINGTON - In an endorsement of rising racism in Donald Trump-led United States of America, a crowdfunding campaign ...

The 45th US president declared the emergency on 15 February after Congress refused his requests for $5.7bn to construct the wall. By declaring an emergency, Trump sought to bypass Congress and build the wall with military funding to fulfill the promise he made during the campaign.

The Democratic-controlled House of Representatives passed a resolution to overturn the emergency last month, with the support of 12 Republicans to get it through the Senate.

However, the 'defiant' Trump vetoed the resolution earlier this month using his authority for the very first time against the House.

Congress will now need a two-thirds majority in both chambers to overrule the veto, which analysts find impossible.

Trump has faced legal as well as political troubles in executing his plan to build a wall along the border with Mexico but the Republican has stood his ground over the issue which might become a contentious issue before the re-election bid in 202o.

Building a 2,000-mile wall along the Mexican border was one of his key proposals during the presidential election campaign. He had also said Mexico would pay for the wall, which he said would cost about $8bn (£6.4bn).