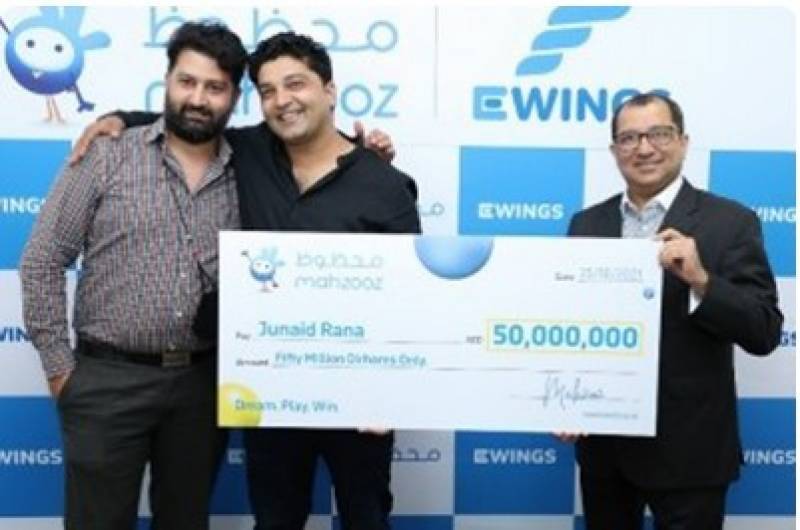 Pakistani man Junaid Rana won Mahzooz’s first-ever Grand Prize of AED 50,000,000 (approx. Rs2.5 billion or $13.6 million), the biggest cash prize ever to be won in the UAE and the Gulf Cooperation Council (GCC) in a live draw.

Junaid, 36, who works as a company driver in Dubai, won the staggering prize money in the 48th weekly live Mahzooz draw.

Junaid describes a series of fortunate events that paved the way to his life-changing participation in the draw. “I usually participate in Mahzooz when my salary is credited. This month, my salary was delayed due to a public holiday and was credited on the day of the draw.”

On Saturday evening, instead of stepping out of his car to withdraw money from the ATM for a grocery run, Junaid stayed in his car, opened the Mahzooz app and participated on a whim: “An inner voice told me Mahzooz was a better investment than snacks. I clicked on six random numbers two hours before the draw’s cut-off.”

Although the long-time Mahzooz participant has spent every single day of the last 11 months daydreaming about what he would do if he won millions, Junaid’s first day as a millionaire was like any other. “The only unusual thing I did was offering to sponsor my barber’s wedding when I went to get a haircut.”

Junaid’s generosity can be traced back to his childhood riddled with financial hardships. “My dad’s small embroidery and tailoring business barely covered my siblings’ and my school fees. I dropped out after ninth grade and did odd promotion and sales job to support him. We moved back to Pakistan where he passed away due to kidney failure when I was 18. Maybe, help from someone could have saved my father’s life,” Junaid says.

Besides helping strangers, Junaid plans to pay off some loans and build houses in Pakistan for each one of his four siblings with his prize money. “My greatest dream has always been to build a sprawling mansion where all my siblings and their families and my family can live together with our mother. But now thanks to Mahzooz my dream has evolved because I can afford it! Because of Mahzooz I’m able to piece together my scattered, broken dreams and shape them into a wonderful new reality,” said the father of two, who’s expecting a third child.

Junaid has no magic formula for picking winning numbers. He credits stumbling into this remarkable windfall to his parents’ blessings. “There’s no other explanation to why I felt like participating during the last couple of hours! AED50,000,000 has the power to fulfil every single dream on earth except for bringing my father back to life. But I’m going to do everything I can for my mother, family, my loved ones, and even strangers,” says the loving son.

He does have one piece of advice to give millionaire hopefuls. “I manifested my dreams, and so I want to tell people to never stop dreaming. Dreams have a way of coming true if you have unwavering belief in them. And always do good deeds – what goes around always comes around,” concluded Junaid.