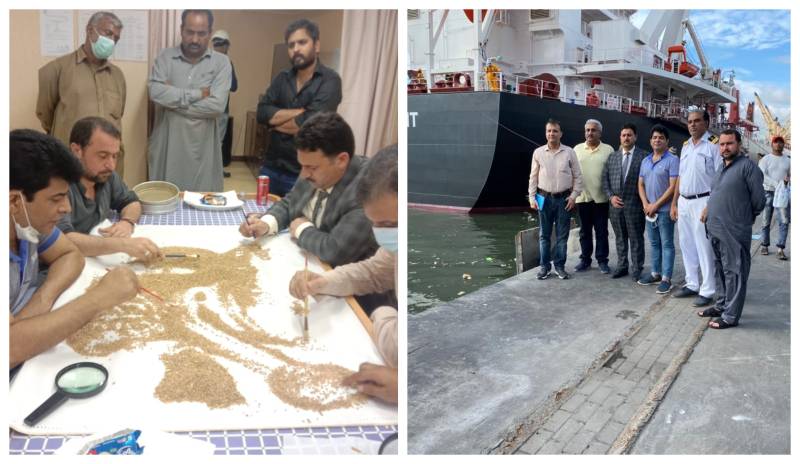 KARACHI - The first vessel namely YM Summit Majuro carrying 60, 804 matric tons wheat from Ukraine was initially subjected to health examinations and other legalities by the concerned authorities as it was berthed at Karachi port on Wednesday afternoon.

The vessel was followed by detail mandatory Quarantine Inspection by the senior management of Federal Ministry of National Food Security and Research.

Dr. Falak Naz, Director General, Federal Department of Plant Protection (DPP) and his team comprising of senior quarantine experts have thoroughly examined the imported wheat in light of national and international quarantine regulations and allowed discharge of the vessel after satisfactory inspection.

Earlier, Mr. Fakhar Imam, the Federal Food Minister along with Mr. Omar Hamid Khan, the Federal Secretary Ministry of National Food Security in a press briefing before the arrival of the wheat vessel have informed about the efforts of government on the special instructions of the Prime Minister Imran Khan to immediately tackle the increasing wheat flour price issue. The Federal Minister shared that the positive downward price impact of wheat import would be revealed instantly.

The wheat price in Central Punjab Mandi has already been come down from Rs. 2150 per 40 Kg to Rs. 1950. It is expected that with enough wheat import the existing prices will come down to normal affordable limits.

Transportation of imported wheat to the whole country was started from Wednesday. The second wheat import vessel of private sector will reach Karachi port on 28th August followed by seven more such vessels reaching Karachi port with the interval of a week time. The Ministry of National Food Security is in close liaison with all concerned quarters to ensure availability enough logistics for timely supply of wheat to mills. An undertaking has also been taken from the each importer, which bound them that the imported wheat would solely be used for immediate consumption purpose and to refrain them for selling it as seed.

Likewise, the Ministry of National Food Security is in regular link with Trading Corporation of Pakistan (TCP) to make necessary arrangement for import of wheat by the public sector to strengthen the strategic wheat reserves of the country and avoid any wheat shortfall in future.