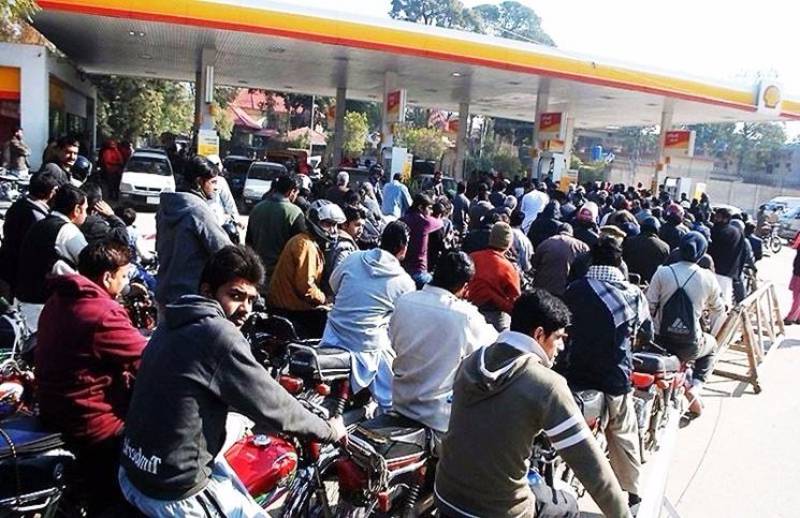 LAHORE - Residents of Punjab's capital Lahore were left high and dry on Monday as the fuel crisis turned severe due to widespread protests that resulted in the blocking of highways across the country.

According to media reports, around 60 percent of the fuel stations dried out in Lahore due to the reason that the tankers carrying oil were stranded near Sheikhupura, Wazirabad, Karachi and Gujranwala due to roads closure caused by protests.

Commuters heading to and from different cities are also facing hardships as the religious groups had blocked the roads as a show of support for Tehreek-e-Labbaik members who had staged a sit-in at the Faizabad interchange from last three weeks.

As the Pakistan Muslim League Nawaz led federal government signed an agreement with the protesters, the leader of TLP, Khadim Hussain Rizvi announced calling off the strike on Monday (today).

After the announcement, the spokesperson of Oil Tankers Association confirmed that the fuel supply would be restored from Karachi and other cities.

The protesters at the Faizabad interchange assembled against the amendment in the Khatam e Nabuuwat clause in the recently passed Election Act 2017.

For over three weeks, the thoroughfare of the city remain blocked, however, with the operation launched by the local administration on Saturday, protests erupted across Pakistan with the demonstrators blocking main highways connecting different cities of Punjab.

The agreement, which marked the end of protests was brokered by a senior officer of Pak Army Major General Faiz Hameed and it bound the law Minister Zahid Hamid to tender resignation, which he formally did.