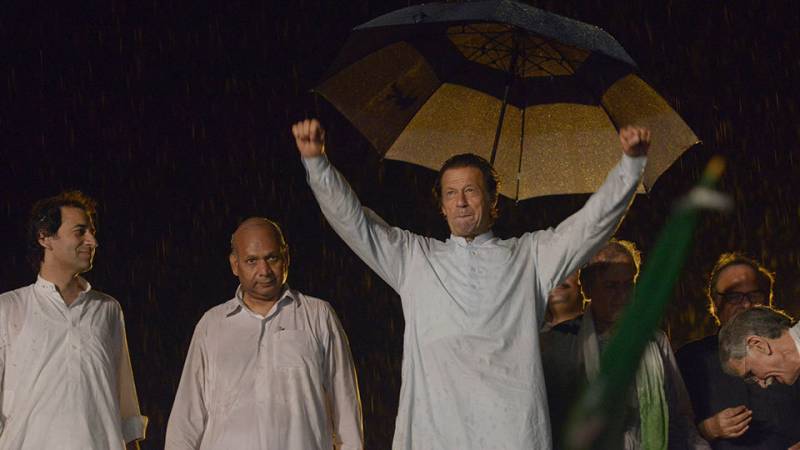 ISLAMABAD - Pakistan Tehreek-i-Insaf (PTI) Spokesman Naeemul Haque on Wednesday warned the government that if it attempts to arrest Imran Khan "it will face a harsh response".

Talking to DawnNews Naeem sarcastically added: "If the government is itching to arrest him, it should do so."

At a time when the PTI is once again planning a protest in the federal capital, the Anti-Terrorism Court (ATC) in Islamabad last week repeated warrants for the arrest of Imran Khan, Pakistan Awami Tehreek (PAT) chairman Dr Tahirul Qadri and 70 others for attacking the state-run Pakistan Television during the 2014 sit-in.

Despite the court's orders, the PTI chief was accompanied to court On Wednesday under tight security by a heavy police contingent.

The PTI has planned a 'lockdown' of Islamabad on November 2 if Prime Minister Nawaz Sharif doesn’t agree to an investigation into the Panama Papers leaks, under the terms of reference proposed by the opposition or resigns from his position.

Naeemul Haq said that neither Imran Khan, nor any other PTI worker, would ask for bail under 'political' cases.

"The government is declaring a great leader a terrorist," the PTI spokesman claimed.

PTI chairman Imran Khan had announced the plan to lay siege to Islamabad as part of the party’s accountability movement against the Prime Minister and members of Sharif family family in the aftermath of the Panama Papers truce.

PTI vice-chairman Shah Mehmood Qureshi had earlier said it could be T20, one day or five-day test match, and if the government didn’t behave, “we are even ready for a tournament”.