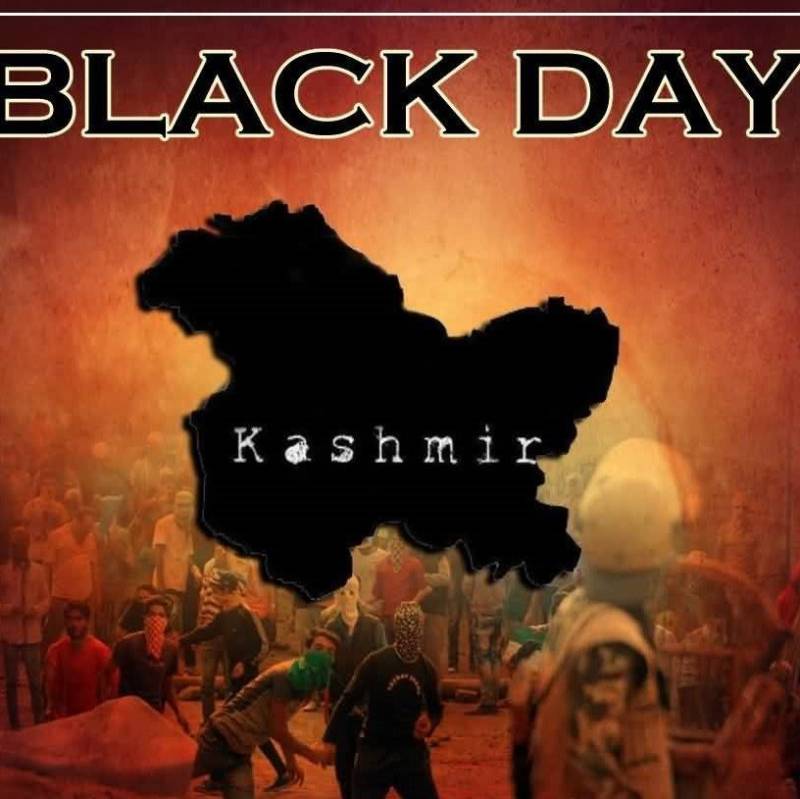 ISLAMABAD - Kashmiris on both sides of the Line of Control (LoC) and the world over are observing Black Day today to convey to the world that they reject India's illegal occupation of their homeland on this day in 1947.

It was on this day when Indian troops invaded Jammu and Kashmir and occupied it in blatant violation of Partition Plan of the Subcontinent and against the Kashmiris' aspirations.

According to Foreign Office spokesperson Dr Mohammad Faisal, the 72 years struggle of Kashmiris' right to self-determination will be highlighted on this day.

He said the world will be apprised once again of the enormity of the situation in the Indian occupied Kashmir.

The spokesperson said the international community will be demanded to fulfil its promises regarding granting the right of self-determination to Kashmiris.

Several programmes, including rallies and seminars, have been planned throughout the country to express solidarity with the people of occupied Kashmir.

Instructions have also been given to Pakistani missions abroad to organize events and engage with Pakistani Diaspora, local parliamentarians, think-tanks and other relevant people to highlight the significance of the day.

In Azad Kashmir, rallies, demonstrations and protest gatherings will be held in all small and big cities of the state under the auspices of Kashmir Liberation Cell, Huriayat and religious organizations.

On the directives of AJK Prime Minister, events to observe Black Day will be arranged by districts and tehsil administrations.

Main function of the Black Day will be held in the state capital Muzaffarabad. Prime Minister Raja Farooq Haider Khan will preside over the function. A rally will also be taken out at the end of programme.

Minister for Kashmir Affairs Ali Amin Gandapur in his message on the eve of Black Day has asked the international community to take early action against Indian unilateral and illegal step of August 5, as Kashmiris are facing curfew for the last 84 days, the Radio Pakistan reported.

All Parties Hurriyat Conference led by Syed Ali Gilani in a statement has asked the people of occupied Kashmir to march towards Lal Chowk of Srinagar, today and hold a sit-in protest to show the world that resistance of Kashmiri people does not need the means of telecommunications for their survival.