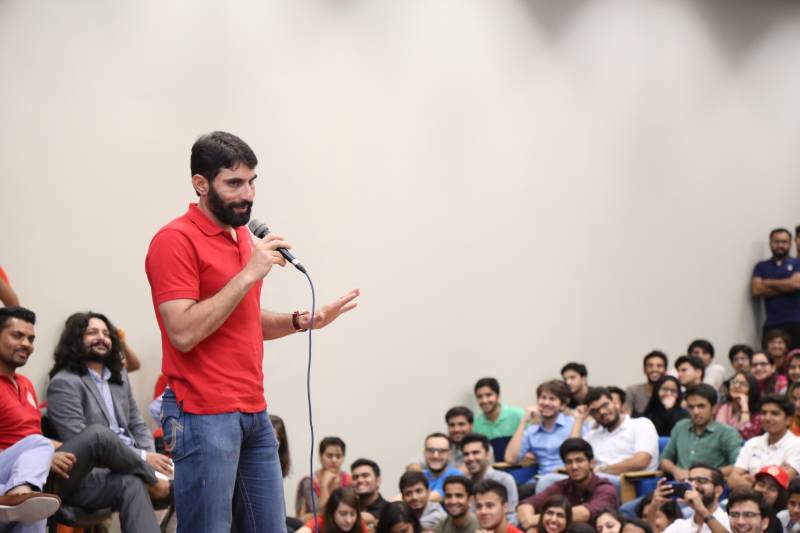 LAHORE - The champions of PSL, Islamabad United, led by their captain Misbah-ul-Haq and Head Coach Dean Jones visited LUMS on September 23 as part of their Trophy Tour Celebrations. The team was given a warm reception by the Vice Chancellor Prof. Dr. S. Sohail H. Naqvi, faculty and students.

Islamabad United (ISLU) is a Pakistani professional franchise cricket team that competes in Pakistan Super League. The team was formed in 2015 and is owned by LUMS MBA graduates, Ali Naqvi and AmnaTirmiziNaqvi. The visit was the latest in a series of events by Islamabad United to celebrate their win in the PSL.

The purpose of the tour is also to take the first ever PSL Trophy, the winning prize of Pakistan's first ever national franchise level sporting competition, to all parts of the country as a gesture to appreciate the fans' support in making Pakistan Super League a roaring success.

The team and students engaged in a panel Q&A session and the event was a venue for dialogue and interaction between the most ardent of cricket fans and their sporting heroes.  The passionate attendees presented many questions to Pakistan’s most successful test captain Misbah-ul-Haq, who was recently presented the Test Mace for securing number 1 ranking by the ICC chief executive, David Richardson.

Misbah, stressed the importance of education for athletes and said, “We need players who are not only great athletes but also well-rounded individuals. I urge top-level universities like LUMS to provide further opportunities to players who show promise in the sport and groom them. This will produce athletes who are better advocates of the sport as well as the nation.”

LUMS and Islamabad United pledged to make this visit a foundation for a long-term partnership between the two institutes, promising a commitment to bring about professionalism to the Pakistani sports structure and creating greater opportunities for students to take part in higher level sports.