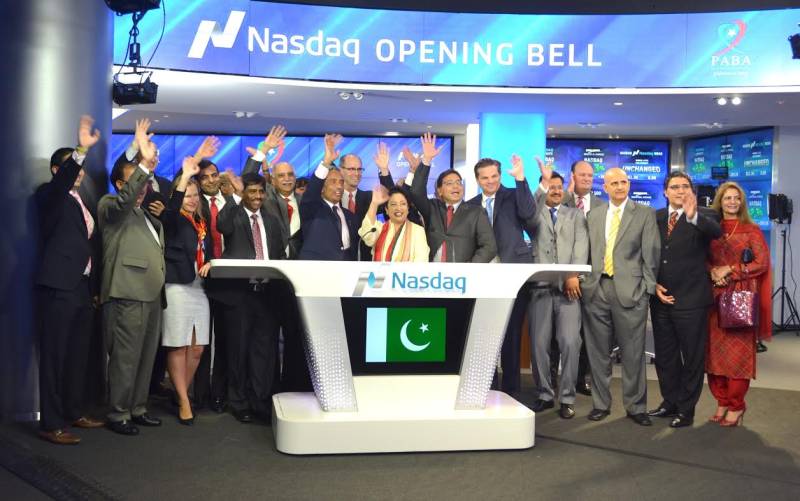 NEW YORK (Staff Report) - Pakistani Ambassador to the United Nations, Dr. Maleeha Lodhi, Friday rang the opening bell at the NASDAQ Stock Exchange in New York to signal the ceremonial start of trading, saying Pakistan's economy is on the upswing as it pursues liberal economic and investor-friendly policies.

"We are open to business, and we are open to foreign investment," she told traders and investors, gathered at the impressive ceremony held in NASDAQ's office in New York's Time Square to mark 69th year of Pakistan's establishment, the first time the stock exchange has bestowed this honour on the country on its Independence Day.

A video based on a patriotic song by Pakistani singer Najam Shiraz was screened ahead of the ceremony.

people in the Times Square watched on a giant screen. Pakistan's national flag was also flashed across the screen.

"It is an honour to represent Pakistan at the NASDAQ opening bell ceremony as part of our Independence Day celebrations from the platform of the Pakistan-American Business Association (PABA) which is doing an excellent job to promote Pakistan-US business ties through private sector cooperation," Dr. Lodhi said before pressing the button to set off the bell.

"Our economy has staged an impressive recovery while our security situation is improving by the day," she said.

"Our hardworking and enterprising overseas Pakistanis are not only making a mark in their countries of adoption but sending back remittances which are at a record level today," Dr. Lodhi said.

"We are inspired by the ideals of our founding fathers in our efforts to ensure that Pakistan is a modern, progressive, democratic and tolerant Muslim nation.

" Earlier, top officials of NSDAQ -- Andew Hall and David Wicks -- congratulated the government and people of Pakistan on the Independence Day, after after Hall introduced Ambassador Lodhi.

The Chairman of PABA, M. Siddique Sheikh, its President Keith Segerson, an active member, Sajjad Qamar, were among those present at the ceremony, which was also attended by Pakistan Consul General Raja Ali Ejaz.

"This year's Independence Day coincides with a remarkable recovery in Pakistan's economy. This is a very exciting time for Pakistan to attract foreign investment and for the US based companies to benefit from lucrative incentives this country offers.

PABA is ideally poised to work as a bridge between the private sectors of the two countries," Segerson said in a statement.