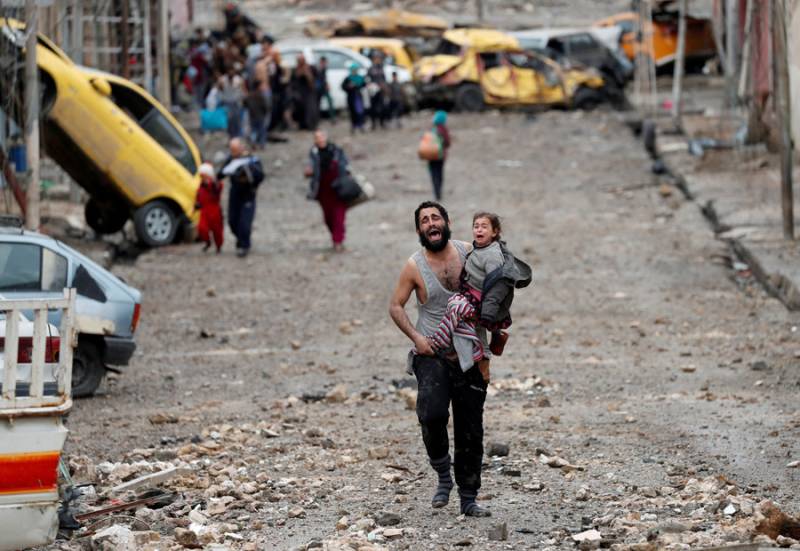 CLEVELAND - A US-based activist’s post, ostensibly meant to “raise awareness” about Syrian civilians, turned out to be a complete fabrication. Twitterati found the photos he used were actually from Gaza and Mosul.

A Cleveland-based user who goes by the name of Sami Sharbek has posted two photos on his Twitter account – one showing Middle Eastern-looking residential blocks being bombed from the air; the other depicting a man carrying a crying child. “This is not a movie. This is Syria,” he wrote in the caption.

This is not a movie. This is Syria. pic.twitter.com/jdlxIwtLOn

The post was widely retweeted and liked. As of Wednesday morning, it had racked up over 125,000 shares and 154,000 likes. However, what many people failed to notice is that the photos portraying the perils of war were shot outside Syria.

This photo shows the same airstrike featured in the photo tweeted by Sharbek. It comes from Reuters' coverage of an Israeli strike on eastern Gaza city.

In a subsequent post, he continued jabbing Sharbek with photo proofs, posting a Reuters image of the US-backed Mosul siege; an event which became notorious for its high civilian death toll and the all-round destruction of Iraq’s second-largest city.

Shortly after, Sharbek acknowledged the post was a fake and apologized for the error. “I wasn’t aware that the images came from Gaza and Mosul,” he wrote. “My only intention was to show awareness for my country.”

Regardless, he still asked users to make donations, sharing a link to a non-profit organization called the Syrian American Medical Society. What’s more, he again posted a series of photos whose credibility is doubtful – at least in the case of the infamous image of a little boy allegedly pulled from the rubble after an airstrike on Aleppo.

Bogus photos on the horrors of war in Syria have surfaced on more than one occasion. In 2016, Egypt’s Interior Ministry said it had arrested a group of five people caught producing images purportedly depicting scenes of suffering in Aleppo.

One particular photo that they had planned to pass off as a real picture from Syria featured a small girl holding a teddy bear in a white dress marked by splotches of blood, with the ‘ruins of Aleppo’ behind her.

The ministry said that the residents of Port Said, a city on the Suez Canal, were caught in the middle of their photo shoot as the 12-year-old girl, Ragd, was posing for 21-year-old Mustafa, who told the authorities that he “normally photographed weddings and ceremonies, but had an idea for something else.”

US seeks robust partnership with Pakistan on counter-terrorism