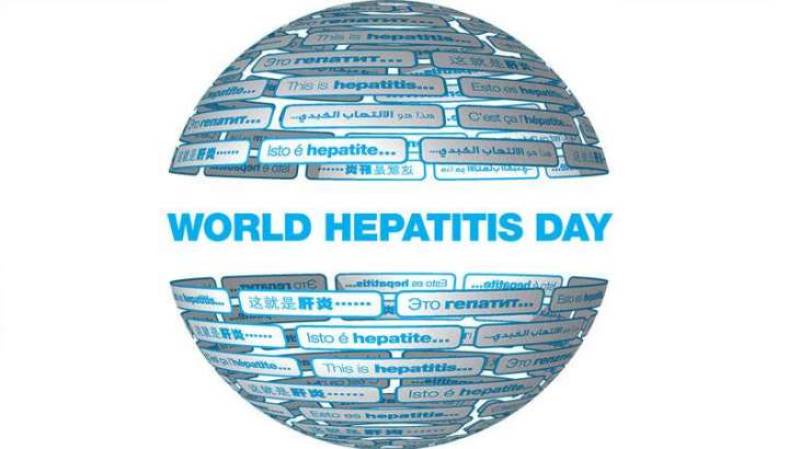 ISLAMABAD - Like other parts of the globe, World Hepatitis Day was observed on Saturday in Pakistan to promote awareness about the disease that affects the liver.

Shifa International Hospital held an event in this connection. Hepatitis is the 8th highest cause of mortality globally and was responsible for an estimated 1.34 million deaths in 2015, a toll comparable to that of HIV and tuberculosis. Globally, approximately 257 million persons are chronically infected with Hepatitis B and 71 million with Hepatitis C.  At this rate, an estimated 20 million deaths will occur between 2015 and 2030, Dr Nadeem Iqbal, Gastroenterologist at Shifa International Hospital shared this data on World Hepatitis Day.

World Hepatitis Day (WHD) takes places every year on 28 July bringing the world together under a single theme to raise awareness of the global burden of Viral Hepatitis and to influence real change.

On WHD 2018, Shifa International Hospital has launched ‘Find the Missing Millions’, an awareness campaign to educate, influence national testing policies and encourage people to get screened and become advocates in the quest to find the undiagnosed.

This campaign has been launched to bring much-needed attention to the fact that millions of people are living with Viral Hepatitis unaware. It should also be used to inspire the community to take action to support the uptake in screening and diagnosis, whilst driving action to join the quest and link people living with the disease to care.

He shared that within Pakistan almost 12 million people are suffering from Hepatitis B or C. Each year brings about 150,000 new cases. The majority of people catch this infection in healthcare settings without being aware of it.

The disease is called a silent killer because many patients remain undiagnosed and untreated for many years before developing complications and dying.

Major risk factors for the transmission of Hepatitis B and C infection includes therapeutic injections, syringe reuse, surgery, improper sterilization of invasive medical devices, blood transfusion, hospitalization and sharing of razors while getting the shave from barbers.

Some population groups are highly affected by Hepatitis B and Hepatitis C such as injecting drug users and thalassemia patients.

For hepatitis C, the high prevalence of infection is reported in children especially those who were admitted in hospitals with acute hepatitis, while for HEV, most of the infections were due to faecal contamination of water.

“Highly effective recombinant vaccines are now available. A vaccine can be given to those who are at increased risk of HBV infection such as healthcare workers. It is also given routinely to neonates as universal vaccination in many countries.

Hepatitis B Immunoglobulin (HBIG) may be used to protect persons who are exposed to Hepatitis B. It is particularly efficacious within 48 hours of the incident. It may also be given to neonates who are at increased risk of contracting Hepatitis B i.e. whose mothers are HBsAg and HBeAg positive. Other measures include screening of blood donors, blood and body fluid precautions,” he concluded.

Organizations such as the United Nations and the World Hepatitis Alliance work with individuals and community groups to promote awareness-raising campaigns worldwide about hepatitis.

Information about World Hepatitis Day is usually distributed via social media, newspapers, posters, and through the World Health Organization (WHO) website.

Hepatitis simply means inflammation of the liver and can be caused by different things. One of the most common causes of chronic (long-term) hepatitis is a viral infection.

According to the World Hepatitis Alliance, about 500 million people are currently infected with chronic hepatitis B or C and 1 in 3 people have been exposed to one or both viruses.

There is a different theme for World Hepatitis Day each year. Past themes included “Get tested” and “This is hepatitis”.

Viral hepatitis B and C are major health challenges, affecting 325 million people globally. They are root causes of liver cancer, leading to 1.34 million deaths every year.

Hepatitis B and C are chronic infections that may not show symptoms for a long period, sometimes years or decades. At least 60% of liver cancer cases are due to late testing and treatment of viral hepatitis B and C. Low coverage of testing and treatment is the most important gap to be addressed in order to achieve the global elimination goals by 2030.

WHO will focus on the theme: "Test. Treat. Hepatitis" for World Hepatitis Day 2018 events. WHO events and activities can aim to achieve the following objectives globally, in regions and in countries:

To support scale-up of hepatitis prevention, testing, treatment and care services, with specific focus on promoting WHO testing and treatment recommendations; To showcase best practices and promote universal health coverage of hepatitis services; and to improve partnerships and funding in the fight against viral hepatitis,WHO and the Government of Mongolia will hold a series of events in Ulaanbaatar, Mongolia to commemorate the World Hepatitis Day 2018.

The events will engage high-level leaders, advocates and patient representatives from global, regional and national organizations, highlighting the innovative solutions and partnerships needed in scaling up hepatitis testing and treatment services, as well as celebrating the country's championing experience in the global hepatitis response.

Timely testing and treatment of viral hepatitis B and C can save lives.