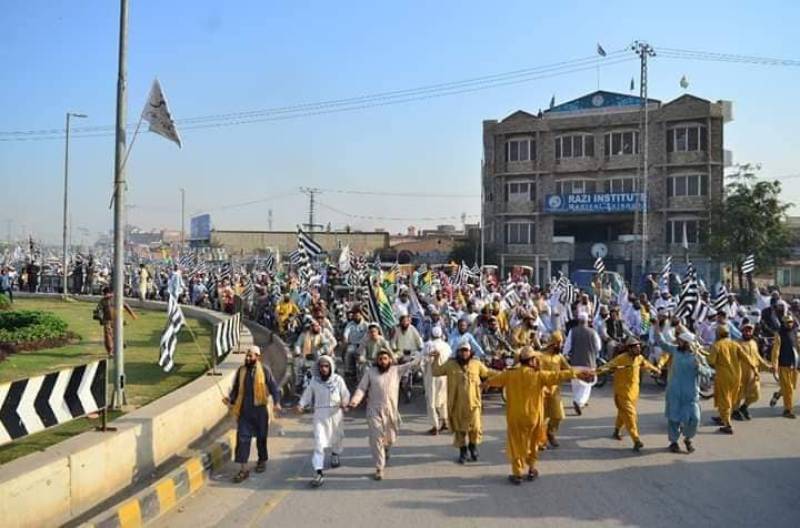 MULTAN - A huge rally led by Pakistan's major religiopolitical party on Monday reached Punjab on its way to Islamabad with an aim to topple the government of Prime Minister Imran Khan.

The so-called Azadi March of Jamiat Ulema-e-Islam (JUI-F), which began on Sunday from Karachi, is being led by its chief Maulana Fazlur Rehman, who claims that the Pakistan Tehreek-e-Insaf (PTI), the ruling party of the country, came into power through rigged elections.

KARACHI - Thousands of people, led by the Jamiat Ulema-e-Islam–Fazl (JUI-F), on Sunday began their so-called Azadi ...

The participants of the rally are expected to be in the hundreds of thousands by the time they reach the federal capital as major opposition parties of the country, including Pakistan Peoples Party (PPP), Pakistan Muslim League-Nawaz (PML-N), and other opposition parties have joined the hands with the JUI-F head against the prime minister.

The protest march may prove a tough political challenge for the PTI government amid increasing inflation and complaints of bad governance.

The protesters will make a stay in Multan and continue its travel to Islamabad on Tuesday.

Addressing the participants, JUI-F chief Fazl said that they will not step back as the ‘war has begun’.

He reiterated that they are fighting a political war as there is a danger to the Constitution of Pakistan.