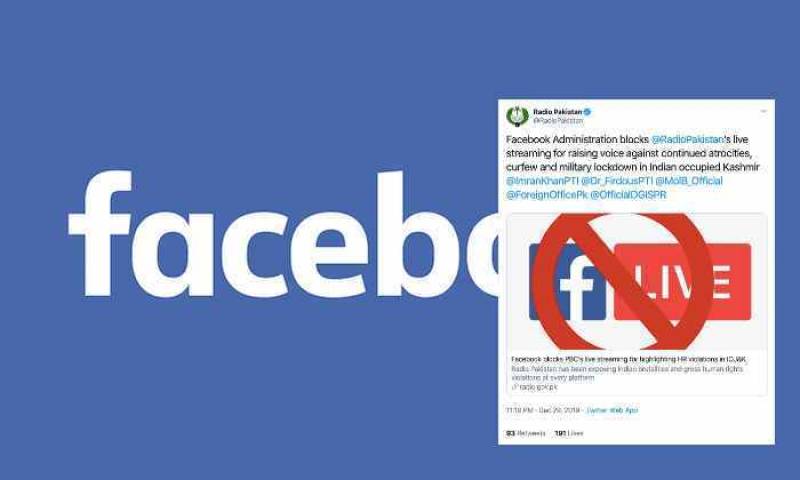 ISLAMABAD – The Facebook administration has blocked live streaming of Radio Pakistan's news bulletins since Friday morning for two months as the latter made alternate arrangement on YouTube Official to continue live streaming of its bulletins, a press release said Monday.

On Sunday, Facebook warned Radio Pakistan that two posts were against its community standards so live streaming of its bulletins were being banned for two months.

It further warned that if Radio Pakistan's posts did not follow Facebook's standards, "your ability to post or comment may be restricted in future." The press release mentioned,"Speaking at an event in the state of Tamil Nadu in March, Indian Prime Minister Narendra Modi had shown his severe annoyance and irritation by the coverage of Radio Pakistan. He lashed out on Congress led opposition for statements against his government's policies as these were quoted by Radio Pakistan."

It may be recalled that Radio Pakistan's News, Current Affairs Channel and Social Media departments extensively covered the events during the Pak-Indian escalation in tensions and the situation arisen in the Indian Occupied Kashmir after August 5.

The Current Affairs Channel conducted special talk shows and discussions, and the news bulletins carried the latest developments with credible and accurate reporting.

Radio Pakistan being the voice of the nation had always played a key role in informing and educating its listeners, the press release added.

The national broadcaster has more than 2.5 million Facebook and almost six lack followers till date and playing the leading role to give the matching response to the hostile agencies and presenting the real picture of Indian state terrorism in the region which is indigestible for the enemies.

A huge number of Radio Facebook.com/radiopakistanofficial followers have demanded the Facebook administration to restore the live streaming of news bulletins on urgent basis.