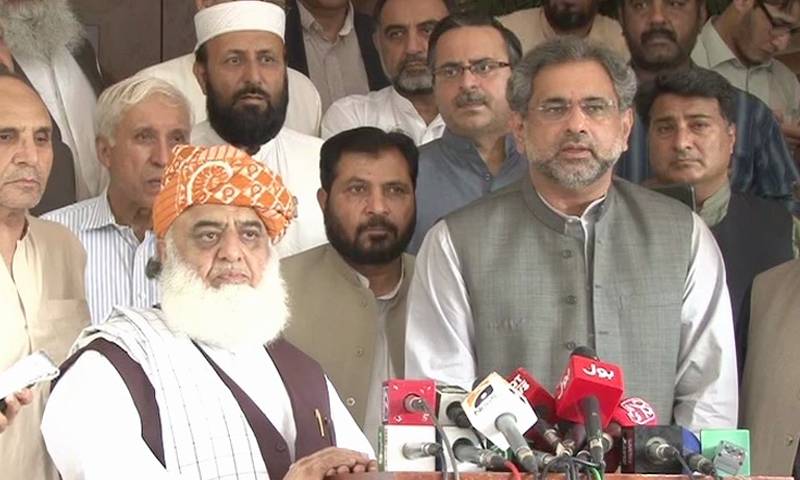 ISLAMABAD - The upcoming prime minister of Pakistan Shahid Khaqan Abbasi challenged his critics to prove irregularities in his finances, saying “whoever wants to file a reference against me should feel free to do so”.

Talking to newsmen following his meeting with Jamiat Ulema-i-Islam-Fazl (JUI-F) chief Maulana Fazlur Rehman in the capital, the former petroleum minister said that to his understanding of legal matters, there was no harm in possessing an iqama (foreign work permit).

"It’s just a visa but nowadays, laws are being interpreted in ways that are stranger than ever," he said referring to the disqualification of Nawaz Sharif.

He expressed that those hurling allegations against him should check their own facts as he disclosed all his assets which were published in the Pakistan Gazette.

When asked about the speculations regarding the involvement of the military in the PM’s disqualification, Abbasi replied, “There are no two sides in this country; we all are one and work for the betterment of this country in a united way.”

Responding to a question regarding whether Chaudhry Nisar Ali Khan would be included in the next cabinet or not given the recent tension detailed by the minister, the interim PM nominee said that the decision had not been taken as yet.

"Chaudhry Nisar has always been a part of PML-N and it will always be that way for us." he added.

It bears mentioning that the decision to elect Shahid Khaqan Abbasi as the prime minister came during a parliamentary meeting of the PML-N on Saturday.

Khaqan Abbasi would assume charge for around 45 days during which Punjab Chief Minister Shahbaz Sharif would contest by-elections for NA-120 Lahore.

After the probable victory of Shahbaz Sharif, he would become the prime minister of the country.

It all began on Friday when a five-member bench of the supreme court unanimously disqualified Nawaz Sharif as prime minister of the country for concealing his employment with FZE Capital, a firm managed by his son Hassan Nawaz.