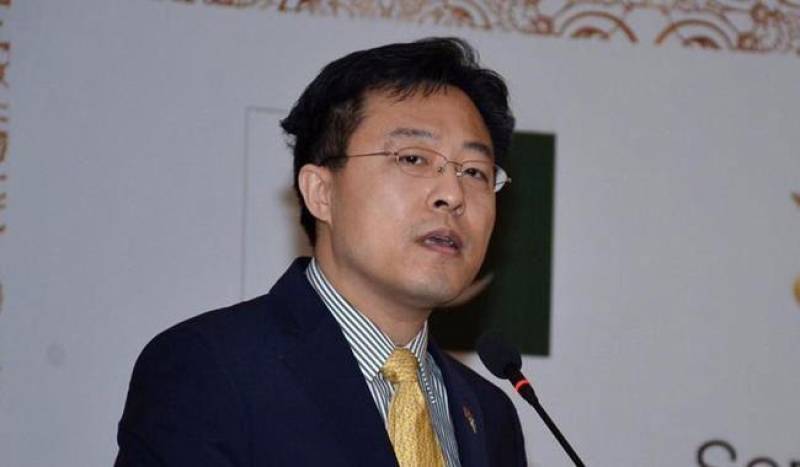 ISLAMABAD - Pakistan will be getting 9 percent share out of total income (revenue) of Gwadar Port and 15 percent of Free Economic Zone on the pattern of an agreement signed with Port of Singapore Authority (PSA), said a senior Chinese diplomat on  Tuesday.

Lijian Zhao, Deputy Chief of Mission (DCM) and Minister Counsellor at Chinese Embassy while describing the benefits of Gwadar port, stated that Pakistan struck a good deal as it would be sharing income, instead of profit.

'Pakistani government has made a very smart move as they will get 9 percent share out of total income (revenue) of Gwadar port instead of total earned profits, although, the agreement was signed on Built, Operate and Transfer (BOT) basis' the diplomat said while addressing third China-Pakistan Economic Corridor (CPEC) Media Forum.

On the establishment of SEZs (Special economic zone), Lijian Zhao said that three out of nine SEZs, namely Rashakai, Dabeji and Faisalabad, seemed feasible as all feasibility studies done by federal and provincial governments were shared with the Chinese side.

In another tweet, the official highlighted that the Gwadar port would generate profit after nine years and Pakistan would have no share during the operational phase.

1. 🇵🇰gets 9% income of Gwadar port & 15% of Free Zone, same as agreement with PSA. 2. 🇵🇰has a good deal as it gets share out of total income instead of total profit. Gwadar port will have profits after 9 years. 3. It is a BOT project. 🇵🇰shall have no share during operation. pic.twitter.com/a3IXAUgj9F

Earlier, in the inaugural session, newly appointed China’s Ambassador to Pakistan Yao Jing said that the CPEC had resulted in new confidence in both Pakistan and China as the two countries had entered into a new phase of progress and prosperity.

'CPEC would bring prosperity in the whole region as many projects were under completion in Pakistan. Media would have to play its due role as they were our great partners,' said the envoy.

ISLAMABAD – Senator Mushahid Hussain Sayed has rejected the impression that China will make Pakistan its colony ...

On the occasion, Senator Mushahid Hussain, Chairman Parliamentary Committee on CPEC said that China gave a vote of confidence by striking CPEC with Pakistan. He said that there were currently 300 projects undertaken by Chinese in Pakistan on which 9,581 Chinese nationals were working on CPEC projects and around 10,000 were working on non-CPEC projects.

The senator also rubbished the perception that the multi-billion dollar China Pakistan Economic Corridor project would make Pakistan a colony of China.

Meanwhile, former Senator Afrasiab Khattak said that this region and its inhabitants were prosperous when the Silk Route was operational and now China was making efforts to revive the route with its Belt and Road Initiative. He stressed upon the need for promoting close trade and economic ties with regional states, especially with Iran and Afghanistan.