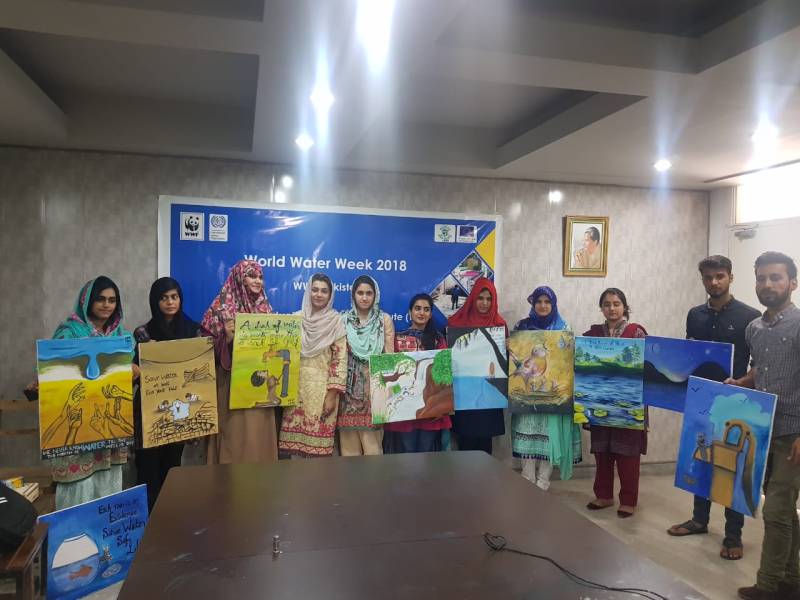 LAHORE - The Worldwide Fund-Pakistan (WWF-Pakistan) has underscored an urgent need for communities, companies and government to come to secure water in a bid to maintain the balance between people and nature.

“Water resources are under immense pressure from climate change, soaring demand for water in domestic, agriculture and industrial sectors,” the WWF-Pakistan said in a statement on the occasion of World Water Week that began on 26 August.

To commemorate World Water Week, WWF-Pakistan in collaboration with the Leather Product Development Institute (LPDI) organised two-day awareness sessions in Sialkot. The sessions focused on raising awareness on water challenges, risks and effective management of available water resources in the country. An art competition was also organized for students from the Fine Arts Department at LPDI who created unique paintings that showed the linkage between biodiversity and water.

This year the theme of World Water Week was ‘water, ecosystems and human development.’ World Water Week provides an opportunity to scientists, policymakers, private sector and civil society actors to network, exchange ideas and foster new thinking around the most pressing water-related challenges.

Hammad Naqi Khan, Director Generel, WWF-Pakistan said that it is important to value Pakistan’s water bodies, particularly rivers and lakes. “To achieve sustainable development goals, it is urgent to manage them efficiently and conserve other water resources,” he said and shared that due to mismanagement and ill-planning of water resources Pakistan is a water scarce country.\

Naqvi informed that Pakistan’s per capita surface water availability has declined from 5,260 cubic metres per year in 1951 to around 1,000 cubic metres in 2016. He also warned that this quantity is likely to drop further to about 860 cubic metres by 2025. The rapid rise in population will further aggravate the water situation. He emphasized that water, ecosystems and their impact on human development require collective action and business ecosystem strategies.

To raise awareness and educate the masses, WWF-Pakistan is also hosting a 10 litre water challenge, a short video competition for the young generation. The aim of this competition is to make the youth understand the water issues in Pakistan. Under this challenge, students will spend 24 hours by using only 10 litres of water. This includes water consumed in all daily activities including the water used to prepare meals, bathe and washing of clothes. The experience will be documented by the students and will make the public understand how hard it is to spend a day with such little water. In this way the water challenge will change student’s perspective about freshwater use and management.

On the occasion of World Water Week, WWF has also released a report titled Valuing Rivers that outlines how the traditionally narrow view of rivers as primarily sources of water and power puts other critical benefits at risk, from freshwater fisheries to natural flood protection for cities and sediment flows that keep the world’s

deltas above the rising seas. While these rivers directly benefit hundreds of millions of people, they are often overlooked and remain a low priority for decision makers – until they disappear and crises occur.

The report shows how this short-sighted approach has proven costly across the globe and could result in even greater economic losses in the future. Already, 19 per cent of global GDP comes from watersheds with high or very high water risk, while most of the world’s great deltas – including the Ganges, Indus, Mekong, Nile and Yangtze – are sinking and shrinking.

To discuss water issues and showcase the work, WWF-Pakistan is attended the World Water Week 2018 in Stockholm, where freshwater initiatives taken by the organization were presented. Sohail Naqvi, Manager ILES WWF-Pakistan along with officials from Arizona State University, Earth Genome and WWF-US will present the Basin Assessment Scenario Intervention Tool (BASIT) which is currently under construction. This tool shows an integrated approach of surface water and groundwater and supply-demand scenarios of the Ravi Basin in Pakistan. He has also shared the findings of the work with the textile sector in Pakistan and discussed the organization’s approach of engaging local stakeholders for collective actions.