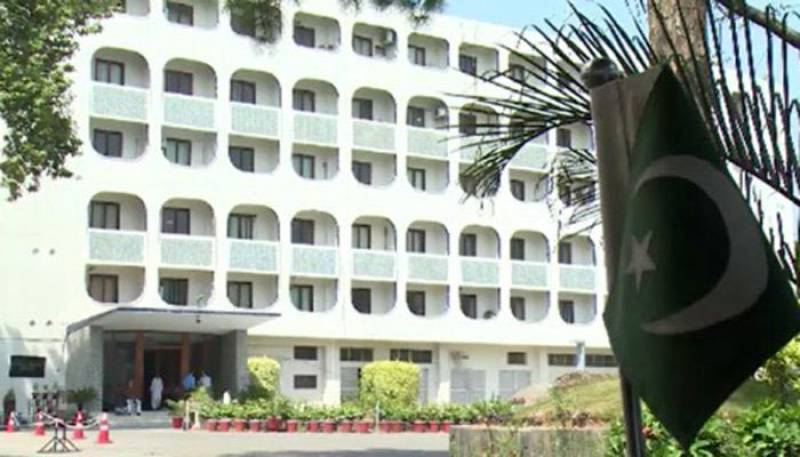 ISLAMABAD - Pakistan on Thursday lashed out at India for dividing the occupied state of Jammu and Kashmir into two new federally-administered territories, terming its move illegal and violations of international resolutions over the disputed Muslim majority region.

"Changing of status quo in the Indian Occupied Jammu and Kashmir is in complete violation of the UN Security Council Resolutions and Bilateral Agreements between India and Pakistan , especially the Simla Agreement," the Foreign Office said in a statement.

The occupied region is an internationally recognized disputed territory, it said, adding that no step by the government of India can change this.

"These changes are illegal and void as per the relevant UNSC Resolutions, and do not prejudice the right to self-determination of the people of Occupied Jammu & Kashmir."

Pakistan would particularly underline that the measures announced by India on 5 August 2019 were forced upon the people of Indian Occupied Jammu and Kashmir through the barrel of a gun by turning the region into prison by over 900,000 Indian security forces.

An iron curtain remains in place on more than 8 million Kashmiri people snapping their communications with the outside world. Curfew remains imposed and movement of people restricted. Many people, especially women and children, are being continuously abused and tortured by Indian occupation forces.

The illegal and unilateral changes effected by India are in no way an “internal matter” as the Jammu and Kashmir dispute remains on the agenda of the Security Council.

Furthermore, contrary to the false projection by the Indian authorities, the purpose of these illegal changes in Indian occupied Jammu and Kashmir is neither development of the region nor welfare of the Kashmiri people.

The real motive is to alter the demographic structure of the Muslim majority state in pursuance of the extremist “Hindutva” ideology, the statement added.

The international community must take notice that transfer of civilian population from outside into IOJ&K is in grave violation of the international laws particularly the Fourth Geneva Convention.

The people of Indian occupied Jammu and Kashmir will never accept the illegal and forceful occupation. The illegal unilateral actions taken by India would only further aggravate the human rights situation in the IOJ&K and threaten to destabilize the peace, security and stability of the South Asian region as well as the world.

India should stop brutalizing the innocent Kashmiris who are suffering under its illegal occupation for the last seven decades. India should immediately withdraw its military forces from the region, remove draconian laws, restore basic human rights of the people, free all detainees, lift all restrictions on the free movement and communications, allow unimpeded and full access to the UN and other international human rights observers, including independent foreign media.

It is imperative that India implements the UN Security Council Resolutions on the right of Kashmiris to self-determination, without further prevarication.

Pakistan would continue to extend its full moral, political and diplomatic support to the suffering Kashmiri brothers and sisters until the realization of the inalienable right to self-determination, in accordance with UN Security Council resolutions, it concluded.