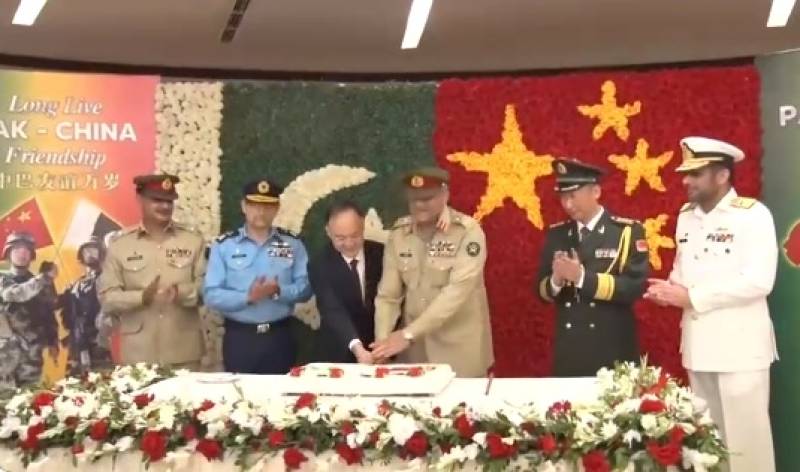 RAWALPINDI - An event was held to commemorate the 95th Anniversary of the founding of Chinese Peoples’ Liberation Army (PLA) at GHQ and it was attended by Chief of Army Staff General Qamar Javed Bajwa as chief guest.

According to ISPR, Ambassador of China to Pakistan Nong Rong, officials from Chinese Embassy and Officers from tri-services of Pakistan attended the event.

Speaking on the occasion, Ambassador of China thanked COAS for hosting reception on the eve of PLA’s 95th Anniversary.

Nong Rong said that China and Pakistan are iron brothers, all-weather friends & strategic partners. He said that the recent meeting of China- Pakistan Joint Committee of Cooperation held at China has setup an important platform for military collaborations which will serve effectively for military-to-military relations between the two countries.

ISPR
95th Anniversary of the founding of Chinese Peoples’ Liberation Army (PLA) was commemorated at GHQ. General Qamar Javed Bajwa, Chief of Army Staff (COAS) was the Chief Guest on the occasion. pic.twitter.com/JYndGn4sCv

COAS felicitated PLA and lauded PLA’s role in China’s defence, security & nation building. Highlighting various facets of the deep rooted ties between the two states militaries and the people, COAS said Pakistan China relationship is unique and robust that has proven its resilience in the face of challenges.

Pakistan Army Chief said PLA and Pakistan Army are brothers in arms & our relationship will continue to contribute towards safeguarding our collective interests.

BEIJING – Naval forces of Pakistan and China have commenced a live-fire drill off Shanghai as part of a four-day ...