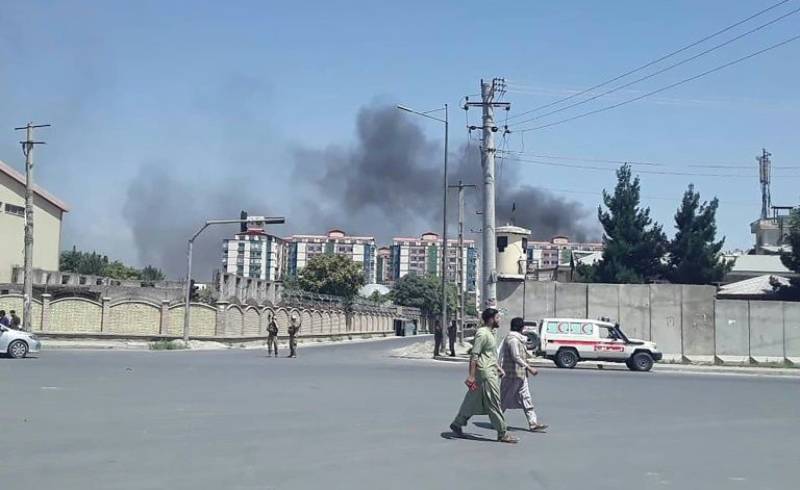 KABUL -  At least 16 were left dead while over 100 were wounded in a Taliban-claimed attack which saw a powerful car bomb rock Kabul early Monday, followed by gunmen who battled special forces in an area housing military and government buildings.

Many children were among the wounded, according to a hospital statement, after the rush-hour explosion sent a plume of smoke into the air above the Puli Mahmood Khan neighbourhood of the Afghan capital and shook buildings up to two kilometres (1.2 miles) away.

AFP reporters could hear gunshots and multiple smaller explosions as fighting between the gunmen and special forces continued more than four hours after the attack began.

"At first, a car bomb took place and then several attackers took over a building. The area is cordoned off by the police special forces and (they) are bringing down the attackers," interior ministry spokesman Nasrat Rahimi said.

He later said that at least one attacker had been killed.

Health ministry spokesman Wahidullah Mayar said that at least one person had been killed and 65 wounded -- including nine children -- and warned that casualties could rise.

"Among the wounded, many children who were going to school," said the Twitter account of the Emergency Hospital in Kabul, where many victims were taken.

The Taliban claimed the attack, which came just two days after the insurgents began the seventh round of talks with the US in Qatar as Washington's eyes a breakthrough before Afghanistan's September presidential election.

Militant spokesman Zabiullah Mujahid released a statement saying the insurgents had targeted a defence ministry building in the area, which was quickly blocked off by Afghan forces and ambulances, with helicopter gunships seen overhead as the firing continued.

Authorities have not confirmed the target.

"We were sitting inside the office when the world turned upside down on us," Zaher Usman, an employee at a branch of the culture ministry, which he said stands just 150 metres (yards) from the blast.