German ambassador eats at a restaurant where even Pakistanis fear eating 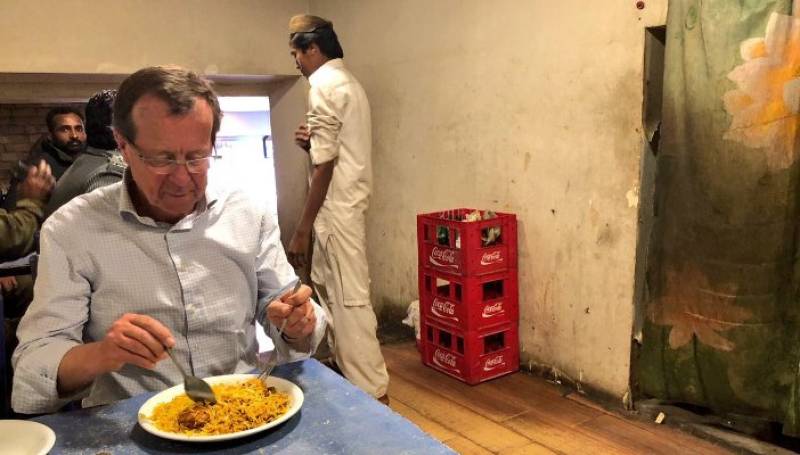 LAHORE - Pakistani cuisine with its trademark aroma and spices is known around the world and today it caught German Ambassador to Pakistan Martin Kobler in its spell.

Kobler visited Punjab's capital on Thursday and tucked into an ordinary food shop, which even Pakistanis avoid visiting, to make his taste buds familiar with one of South Asian region's favourite food, Chicken Biryani.

Biryani is mixed rice dish of this subcontinent. It is made with spices, rice and meat (chicken, mutton, beef, prawn, or fish).

The ambassador shared the experience on his Twitter stating, "had lunch in a small restaurant in #Lahore. big plate of chicken biryani for 100pkr is a great price. and it was very tasty as well!".

had lunch in a small restaurant in #Lahore. big plate of chicken biryani for 100pkr is a great price. and it was very tasty as well! pic.twitter.com/Mu3EG6a8uO

The 70-year-old ambassador’s activities in Pakistan are most definitely warming the hearts of Pakistanis, who have craved for calm and normalcy for almost half a decade. Mr. Kobler, after his appointment to Pakistan, has been to different parts of the country where he mingled with locals, visited local eateries, stopped to buy things from food vendors and traveled in a train.