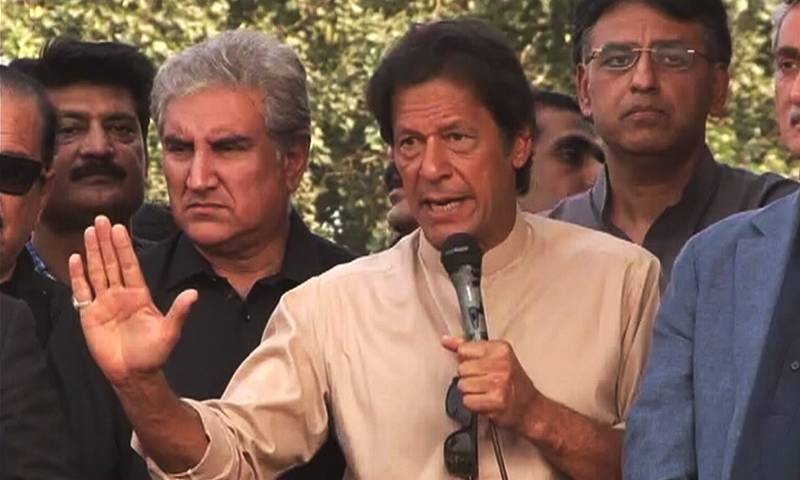 ISLAMABAD - Pakistan Tehreek-e-Insaaf (PTI) has announced to delay its planned November 2nd sit-in and observe the day of 'thanksgiving' as apex court has initiated the legal proceedings against Prime Minister Nawaz Sharif.

PTI chief Imran Khan while addressing party workers on Tuesday announced that the party will not hold any protest or sit-in due to Panama Leaks case hearing in the Supreme court.

Khan said that he is thankful to those who stood by his side in his 'struggle' against corruption.

"We tried our best to get justice in the Parliament, but failed," Khan said, adding that he is thankful to Supreme Court for initiating the legal proceedings in the matter.

Khan asked his party workers to go back to their houses and return today to gather at Parade ground to celebrate the 'Day of Gratitude'. "This is a tremendous victory for us," Khan added.

Supreme Court has not stopped us from protesting , we will go ahead as planned @naeemul_haque

"I am elated that the investigation into Nawaz Sharif's [alleged corruption] will begin day after tomorrow."

He said he is most grateful to Pervez Khattak for his time and effort. He also urged Islamabad administration to remove all barriers, "otherwise we will forcefully remove it."

He urged Chief Minister Punjab to remove all hurdles in Lahore in the light of Lahore High Court decision. Islamabad High Court has allowed us to hold a rally, he said.

"Our sit-in will take place tomorrow. There will be no change in it," said PTI spokesman Naeemul Haque while talking to reporters outside the Supreme Court.

"Thousands of people are pouring into Islamabad for the protest... no court has stopped us from exercising the right [to holding protests]."

Since Supreme Court has already started investigations, they asked us to call off protest, so we'll abide by that @ImranKhanPTI

"We are glad that this commission is going to be set up... it will it will get to the root of the matter...Panama Leaks is a small part of our collective national corruption... the whole system is corrupt here."