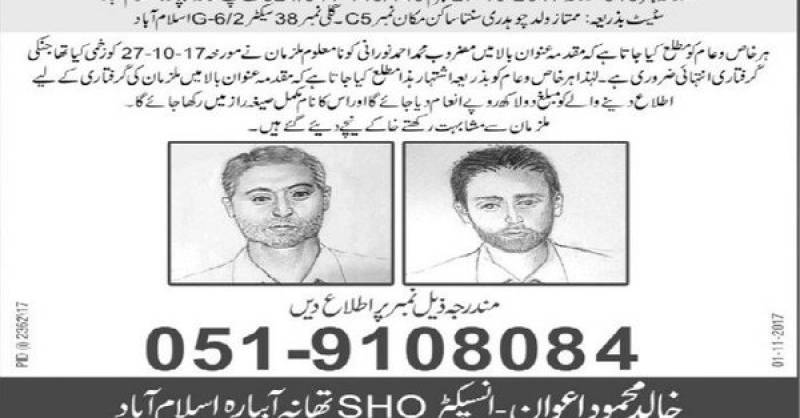 ISLAMABAD - The Islamabad police, investigating the attack on The News reporter Ahmad Noorani, released sketches of the suspects on Wednesday and appealed to the public for help to nab them.

The sketches were issued after the police submitted the initial inquiry report to the Ministry of Interior regarding the attack on the jounrnalist.

Police have announced a prize of Rs200,000 for any person who will provide information regarding the alleged attackers. The name of informer will be kept secret, police said.

The pictures of six suspects have been extracted from a CCTV footage, while these have also been sent to NADRA for identification, local media reported.

Ahmad Noorani, linked to ‘The News’ group was attacked by six men on Friday during last week when he was heading to Islamabad from Rawalpindi.

A total of six unidentified men got down from their motorcycles and tortured Noorani and his driver with iron rods after taking out the keys from the ignition switch.

The attack was denounced by journalist community, rights activists and political leaders.

On Tuesday, interior Minister Ahsan Iqbal visited Noorani to inquire about his health and said that he is personally supervising the investigation of the attack.