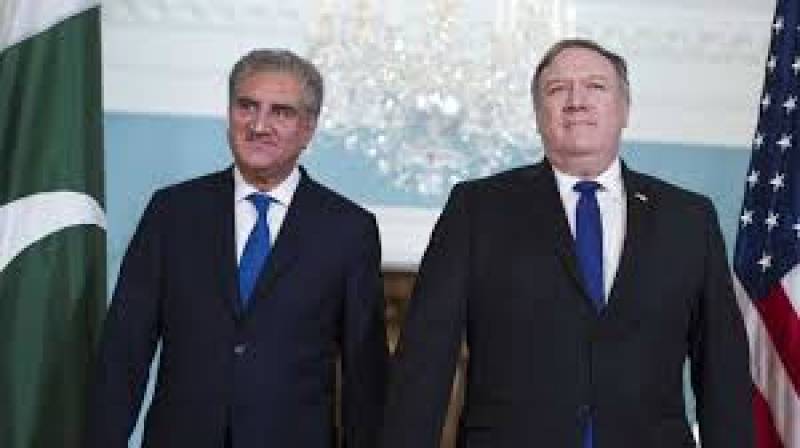 ISLAMABAD - Foreign Minister Shah Mehmood Qureshi held a telephonic conversation with his US counterpart Mike Pompeo on Tuesday and discussed the ongoing Afghan peace process and Islamabad's role in this regard.

According to the Foreign Office of Pakistan, the two agreed on continuing cooperation with regard to the peace process in Afghanistan besides discussing the visit of US Special Representative for Afghan reconciliation Zalmay Khalilzad to Pakistan.

During the conversation, Qureshi informed Pompeo that intra-Afghan talks were a key tenant of this reconciliation process, stressing the need for contacts between the Pakistani and US leadership.

The strained ties between Pakistan and India also came under discussion during the call and Qureshi lauded US' role in diffusing tensions in the region in the backdrop of the aerial dogfight between India and Pakistan last month (Pakistan had downed two Indian fighter jets after they violated the Line of COntrol and ahd captured a pilot as well).

The foreign minister informed Pompeo about the de-escalation measures taken by Islamabad, and also urged US to play its role for the resumption of dialogue between the two South-Asian neighbours.

Well-placed sources reveal that during the latest contact, Qureshi and Pompeo also shared views on Pak-US bilateral relations and security situation of the region.

The fresh contact comes amid the tour of US special envoy Zalmay Khalilzad, who held talks with senior Afghan leaders in Kabul on Monday.

In this trip, Khalilzad is travelling to Afghanistan, the United Kingdom, Belgium, Uzbekistan, Jordan and Qatar from March 25 to April 10. The envoy would also land in Pakistan to hold meetings with senior government officials as Pakistan has pledged to extend full support to the negotiations that could put an end to the long-standing war.