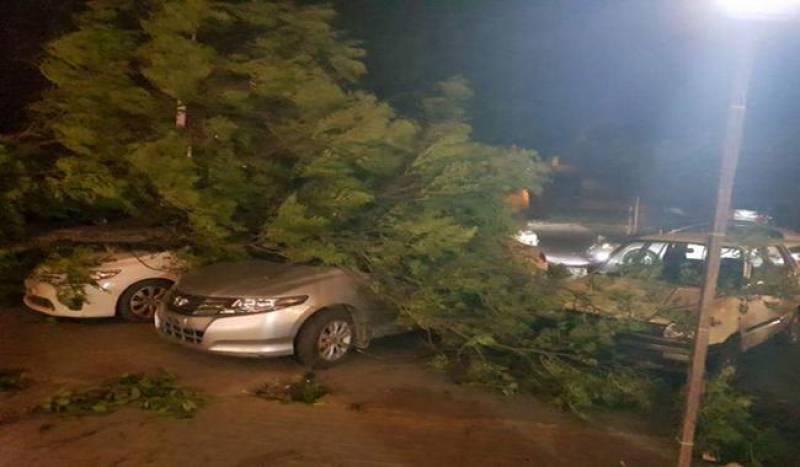 ISLAMABAD (Web Desk) - The Met Office failed to predict the powerful windstorm, accompanied by rain, that swept through the twin cities and parts of Khyber-Pakhtunkhwa on Wednesday night, killing at least 15 people and injuring over 125.

While meteorological departments across the world forecast the weather accurately, the Pakistan Meteorological Department (PMD) relies on outdated equipment to issue weather reports that only mention if the weather hot, dry or frosty.

The Met Office failed to predict the thunderstorm that wreaked havoc in northern parts of the country.

Related: VIDEO: Centaurus being flooded during deadly storm in Islamabad

The PMD report issued on Wednesday at 05:30 pm, hours before the storm hit parts of the country, was a usual copy pasted version of the previous report which predicted rains in some parts of the country but did not warn citizens about the thunder and wind storm.

The storm, with a wind speed of 120 km/hour as reported in the media, caused huge devastation in Khyber Pakhtunkhwa, Islamabad, Rawalpindi, Nowshera, Jamrud, Attock, and Charsadda.

In Islamabad, the storm also exposed the Capital Development Authority’s incompetence as strong winds uprooted trees on all major avenues and link roads, causing huge damage to moving and parked cars. Several billboards were also brought down by the strong winds.

PMD is ill-equipped to predict extreme weather events, such as heat and cold waves, strong dust storms and cyclones, caused by climate change.

The storm not only claimed precious lives but also caused damage to property worth millions of rupees. Had there been a warning from the PMD, the damages may have been prevented.