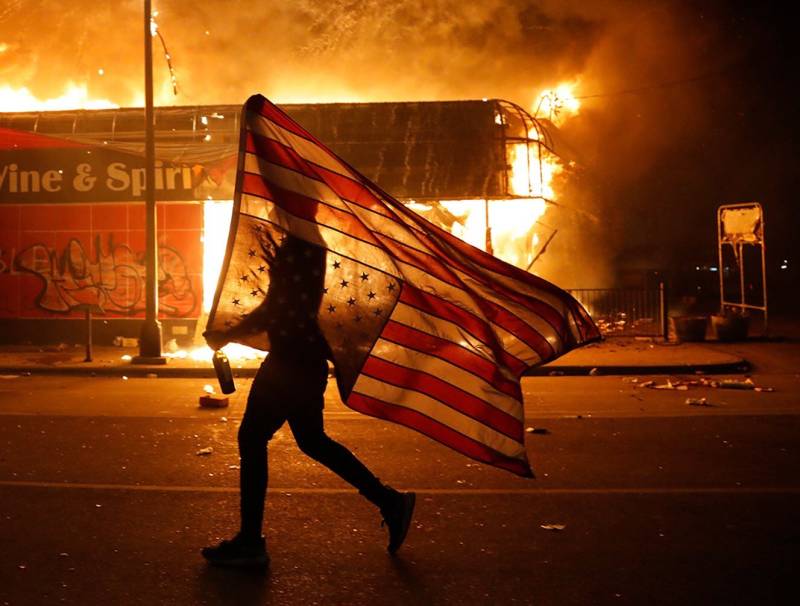 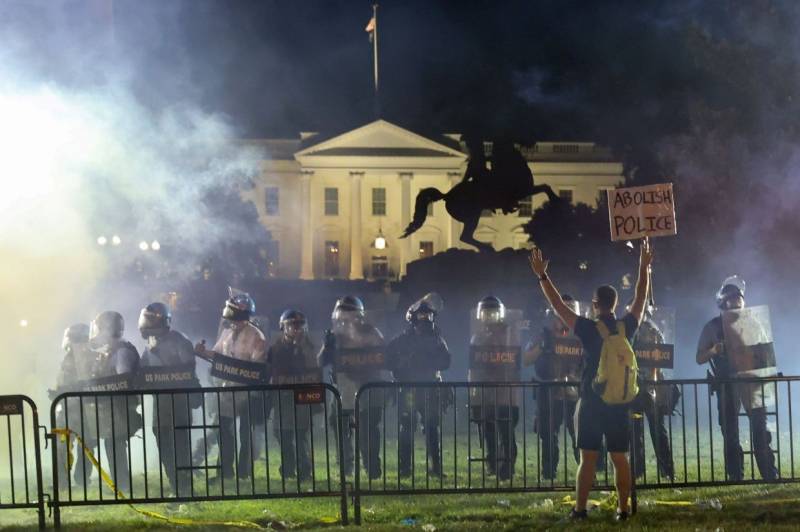 NEW YORK – US President Donald Trump has threatened to deploy the military to end “riots and lawlessness” sweeping the country in an address from Washington punctuated by the sound of explosions as security forces dispersed peaceful demonstrators across the street from the White House.

TV footage showed people running, falling and scrambling for safety as troops removed them by force on Monday night. One woman was carried away by fellow protesters because she was injured and unable to walk.

In his speech, Trump called on governors of the country’s 50 states to “dominate the streets” and announced that he was sending thousands of heavily armed military personnel into the nation’s capital after days of violent outbursts following the death of George Floyd, an unarmed African-American man, at the hands of a white Minneapolis police officer.

My fellow Americans - My first and highest duty as President is to defend our great Country and the American People. I swore an oath to uphold the laws of our Nation -- and that is exactly what I will do… pic.twitter.com/pvFxxi9BTR

After speaking, Trump, with tear gas hanging in the air that had been used to clear away protesters, walked across to visit a historic church. Known as “The Church of Presidents,” the house of worship had been damaged in a fire the previous night, as police and protesters clashed in the streets of Washington.

At the church, Trump posed for photos along with his top aides while he held a Bible in his right hand.

“We have the greatest country in the world,” Trump said. “We’re going to keep it safe.”

The president’s words and actions drew strong criticism from his critics, who argued that Trump had only further inflamed tensions and undercut his claim — made as flash-bang grenades detonated mere blocks away — that he was “an ally of all peaceful protesters.” Congressional Democrats said they were alarmed by Trump’s threat to dispatch the U.S. military against Americans demonstrating against police brutality.

But the president made clear that Monday’s show of force was intended to show that his patience had run out over three days of protests that at one point flared violently enough to drive Trump into an underground security bunker.

Re-establishing a sense of control is crucial for a president who has been widely faulted for his handling of the coronavirus pandemic that has killed more than 100,000 Americans and paralyzed the economy.

Trump and his aides believe the protests are an opportunity to win over voters frustrated by the destruction caused by some of the participants.

In a conference call with governors earlier Monday, Trump signaled his desire to appear more in control, demanding the state officials — who he labeled as “weak” — toughen their response to the demonstrations.

“You have to dominate,” Trump told governors and law enforcement. “If you don’t dominate, you’re wasting your time. They’re going to run over you, you’re going to look like a bunch of jerks.”

Trump said he would deploy the military “if a city or state refuses to take the actions that are necessary to defend the life and property of their residents,” suggesting he might become the first president to invoke a law without the support of state governors. The effort could face legal challenges.

Allies of the president argued that extreme measures are justified after days of protests across major American cities. In Washington, Mayor Muriel Bowser announced a 7 p.m. curfew across the city after demonstrators set buildings and cars ablaze and looted stores.

The Pentagon said 600 to 800 National Guard troops are being sent to Washington.

An active-duty unit from outside the Washington region has been moved into the area and put on heightened alert but wasn’t immediately deployed, according to Pentagon officials.

Pentagon officials said the primary role of the new National Guard forces would be to defend national monuments, protect the White House and coordinate with Washington’s police.

Still, analysts said that the enduring image of the president threatening a crackdown while protesters with their hands raised in the air were tear gassed by authorities across from the White House is likely to reverberate and further divide the country.

Mayor Bowser, a Democrat, tweeted that the action was “shameful” and would make the job of Washington police officers “more difficult.”

Washington Episcopal Bishop Mariann Budde said in a CNN interview that Trump used the Bible and the church as “without permission as the backdrop of a message antithetical to the teachings of Jesus and everything that our churches stand for.”

“I am outraged,” she said about the fact that he used tear gas by police officers and riot gear to clear out the crowd.

And New York Governor Andrew Cuomo said in an interview with the same network that Trump was merely attempting to appeal to conservatives.

“The president wants to make it a reality TV show of God and country, call out the military, and then I go to a church and hold up a Bible,” Cuomo said.

Allies of Joe Biden, the presumptive Democratic nominee for president, sought to contrast Trump’s brief visit outside the church to the former Vice President’s trip to a black church in Delaware earlier Monday to hear members of the community express dismay with cases of police brutality.

Biden tweeted that Trump is “using the American military against the American people. He tear-gassed peaceful protesters and fired rubber bullets. For a photo.” Biden added: “We must defeat him.”

Biden is set to deliver a speech on civil unrest in Philadelphia tonight.

In a joint statement, House Speaker Nancy Pelosi and Senate Minority Leader Chuck Schumer called on “the president, law enforcement and all entrusted with responsibility to respect the dignity and rights of all Americans.”

Trump’s allies applauded his actions. His son Donald Trump Junior, tweeted that the trip to the church was “what leadership looked like” and undermined media narratives that his father “was a coward hiding in his basement.”