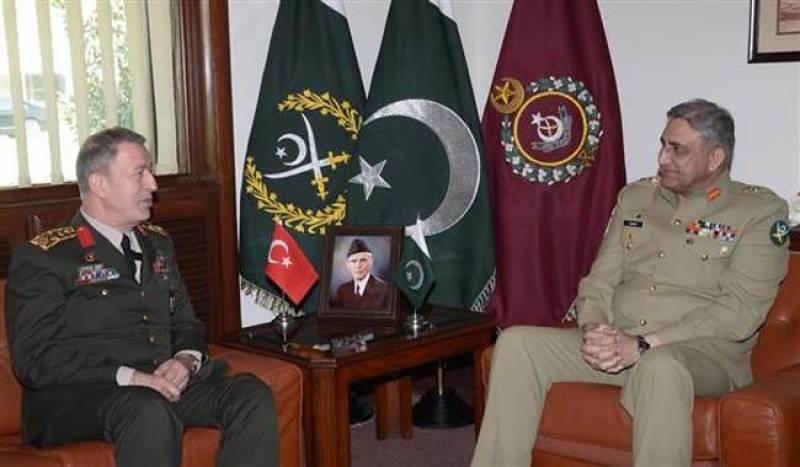 During the meeting, General Bajwa emphasized the need for further enhancing the existing military to military cooperation between the two brotherly armed forces.

The visiting dignitary acknowledged Pakistan’s efforts in the fight against terrorism and lauded the initiation of Operation Radd-ul-Fasaad for elimination of terrorism from Pakistan.

Earlier on arrival, a smartly turned out contingent of Pakistan Army presented a guard of honour to the visiting military head who laid a wreath at Yadgar-e- Shohada to pay homage to the martyred Pakistani soldiers.

The Naval Chief highlighted the role and contribution of Pakistan Navy in maintaining peace and stability in the regional maritime domain. The Admiral also cited the conduct of Multinational Naval Exercise AMAN-17 under the auspices of Pakistan Navy and highly appreciated the active participation of Turkish Navy.

General Hulusi AKAR acknowledged the efforts of Pakistan Navy for establishment of maritime peace, stability and lawful order at sea by bringing together global navies towards a shared commitment under the ambit of Exercise AMAN 17.

He also lauded the commitment and performance of Pakistan Navy in the fight against terrorism including participation in Coalition Maritime Campaign Plan (CMCP) and Counter Piracy Operations for maritime security and stability in the region.