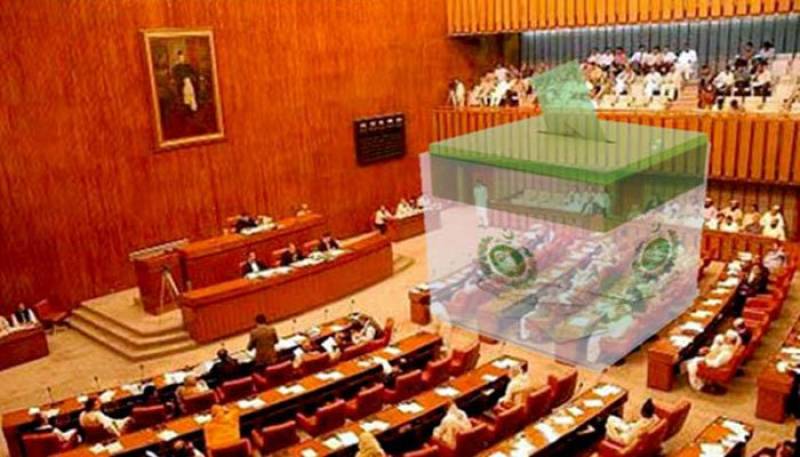 ISLAMABAD – Amid the heated political climate in the country, Senate elections are set to be held on March 3, 2021 (tomorrow).

Balochistan and Khyber Pakhtunkhwa (KP) would elect twelve senators each while Sindh would elect 11 and two senators would be elected from federal capital.

Polling will start at 09:00 am and will continue till 5:00 pm without any break.

The polls will be held through secret ballot following the past practice; it was announced by the Election Commission of Pakistan after the Supreme Court rejected a presidential reference seeking permission to hold elections through an open ballot.

In federal capital, a one-to-one contest between Finance Minister Hafeez Sheikh and former prime minister Yousuf Raza Gillani would be held for a general seat while PTI's Fauzia Arshad and PML-N's Farzana Kausar would face off for a woman's seat.

32 candidates would contest for 12 seats, including 16 for seven general seats and four for two technocrat seats.

In Khyber Pakhtunkhwa, 11 candidates remained in the contest for seven general seats, five candidates for two technocrats' seats, five for the women's seats and four for a non-Muslim seat.

In Sindh, a total of 17 candidates remain in the contest for seven general seats, four for two technocrats seats and three for the two women's seats.

Out of total membership of 104 in Upper House at present, three seats are lying vacant in Senate due to death of PML-N Parliamentary leader Senator Mushahid Ullah Khan, resignation of ANP Senator Sitara Ayaz and non-assumption of the office by Ishaq Dar after being elected as Senator.

The Senate of Pakistan at present consists of 104 members and elections to fill seats in the Senate allocated to each province are held in accordance with the system of proportional representation by means of the single transferable vote.