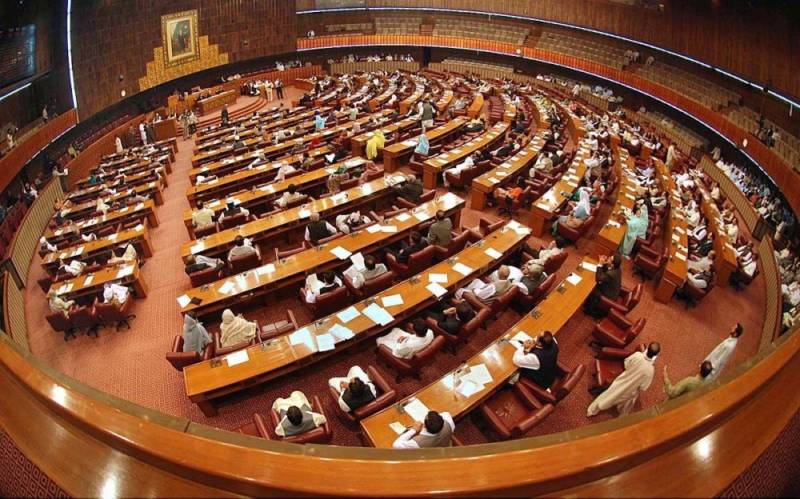 Moreover, the amendment to the Elections Bill 2017 presented by the Jamaat-e-Islami was rejected by the assembly.

The bill, already passed by the upper house (Senate) paves way for former prime minister Nawaz Sharif to head PML-N despite the fact that he is ineligible to hold a public office following a court verdict in July leading to his disqualification.

As PML-N leader Zahid Hamid presented the bill, PTI leader Shah Mehmood Qureshi warned the ruling party that passage of the bill with the controversial amendment can be challenged in court and it is possible that the court declare it a violation of constitution.

Qureshi remarked that the clause 203 of the bill is against the spirit of the country's Constitution. The clause seeks to help an unqualified man to become the head of a party, he said, adding that Supreme Court had also disqualified the person.

Qureshi said that the clause pertaining to the eligibility of parliamentarians to hold party office was being removed solely to protect ousted prime minister Nawaz Sharif.

The PTI leader added that omission of the clause ─ which states that any person ineligible to hold office as an MNA is also ineligible to hold the position of head of a political party ─ was contrary to the Consitution as it would allow a disqualified individual to take charge of political affairs of a party.

"The Constitution says that any person not qualified under Article 62 and 63 (cannot hold office)," Qureshi said, adding that the Supreme Court had set precedent on the matter by disqualifying Nawaz under Article 62(1)(f) in the Panama Papers case.

"You [PML-N] have the majority and we are a minority. But, if you pass the bill then we will challenge it in the court. We want the clause 203 to be removed and Political Parties' Order must be restored," said Qureshi.

Responding to Qureshi, NA Speaker Ayaz Sadiq asked him "Why didn't you speak when you had the chance?"

PTI leader Shafqat Mahmood remarked that the party was deceived due to the way the bill was presented. He remarked: "Nawaz Sharif was bound to be disqualified because of his corrupt practices."

He further said that the bill should be deferred as opposition won't accept it.

While addressing the National Assembly, Awami Muslim League Head Sheikh Rasheed had spoken against the bill.

“You are risking the country's democracy over one person," he said, adding “You have attacked the Supreme Court with a rocket launcher.”

Nawaz Sharif doesn’t even want to see his brother (Shehbaz Sharif) as a party leader, he remarked. “You can start digging the grave of democracy with your majority,” he said while referring to the PML-N parliamentarians.

Last month, the bill was passed by a Senate session chaired by chairman Raza Rabbani.

PPP’s Aitzaz Ahsan, along with other opposition lawmakers, wanted to amend clause 203 of the bill. The clause allows a person who is ineligible to become a member of the parliament to head a political party.

At least 241 clauses of the bill were approved after voting in the upper house. 37 votes were cast in favour of the amendment in clause 203 while 38 votes opposed the crucial amendment.