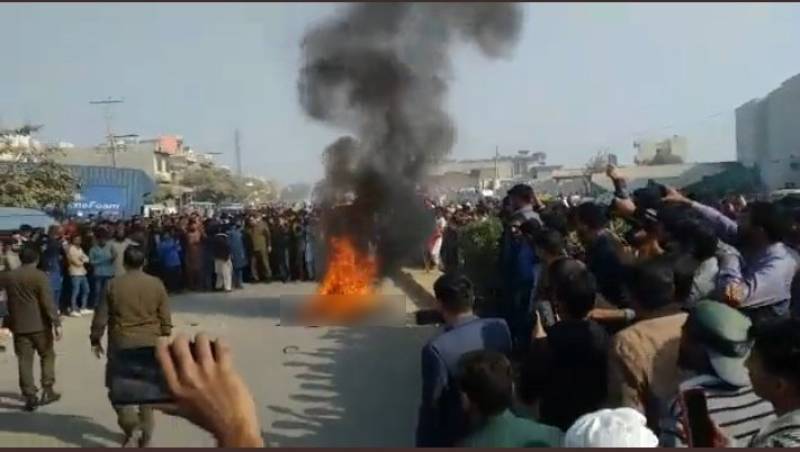 ISLAMABAD – In another tragic incident in the country’s most populous province, a Sri Lankan citizen was tortured to death in Sialkot and his body was set on fire by factory workers.

Reports in local media said a Sri Lankan national, who was working as export manager at a private sportswear factory, was tortured to death on the charges of blasphemy while the mob also torched his corpse.

The incident took place on Wazirabad Road, Sialkot, where the factory workers lynched the Sri Lankan origin man identified as Priyantha Kumara. Initial reports suggest that the deceased man reportedly tore a poster with religious inscription on it while clips doing rounds on the internet show hundreds of people gathered at the site.

Large contingents of law enforcers have been rushed to the site to keep the situation in control after Punjab CM Usman Buzdar and Punjab IGP Rao Sardar took notice of the incident. Sialkot DPO is also present at the site and a thorough investigation will be conducted into the incident.

Meanwhile, Buzdar termed the event as a ‘very tragic incident’ and directed the cops to submit an inquiry report over the matter at the earliest.

All aspects of the mob lynching should be investigated, CM Punjab reportedly said, adding, stern action should be taken against those who take the law into their own hands.

Social activists and human rights organizations also reacted to the development saying the negligence of authorities and extremist policies of the state make Pakistan intolerant.