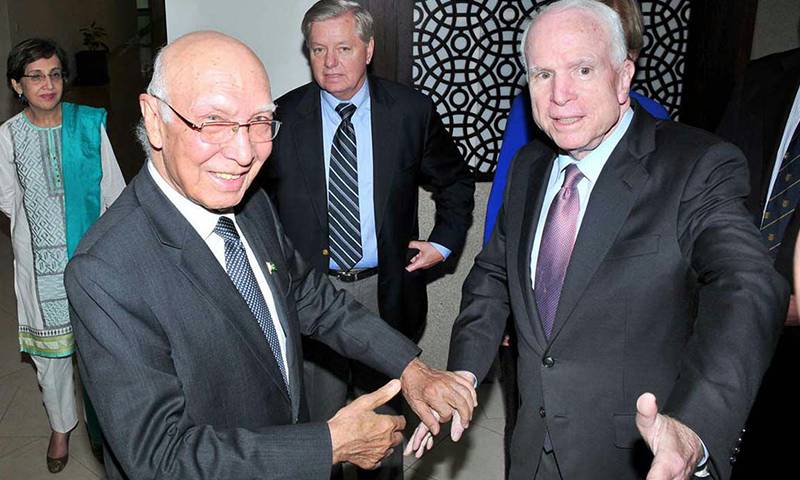 ISLAMABAD - A delegation of US senate headed by Senator John McCain has urged both India and Pakistan to settle the Kashmir dispute through dialogue, and has highlighted that peace could not be established in Afghanistan without Pakistan's assistance.

The delegation met the Adviser to the Prime Minister on Foreign Affairs Sartaj Aziz and other officials including Foreign Secretary Tehmina Janjua and discussed discussed different issues regarding security and bilateral cooperation.

During the meeting, Senator McCain, who is also chairman of Senate Armed Services Committee, acknowledged the contributions and sacrifices rendered by Pakistan to eliminate terrorism. He stressed continued engagement with Pakistan.

Sartaj Aziz said that strategic partnership between Pakistan and US was essential to bring peace and stability to the region and beyond.

He also briefed the delegation about Pakistan's achievement in fighting  terrorism through Operation Zarb-e-Azb and Radd-ul-Fassad.

He highlighted that Pakistan remained committed to support efforts for durable peace and stability in Afghanistan.

According to Radio Pakistan, the Adviser further stressed that Pakistan firmly believed in the legitimacy of the Kashmir cause and peaceful struggle of the Kashmiri people to claim the right to self-determination.