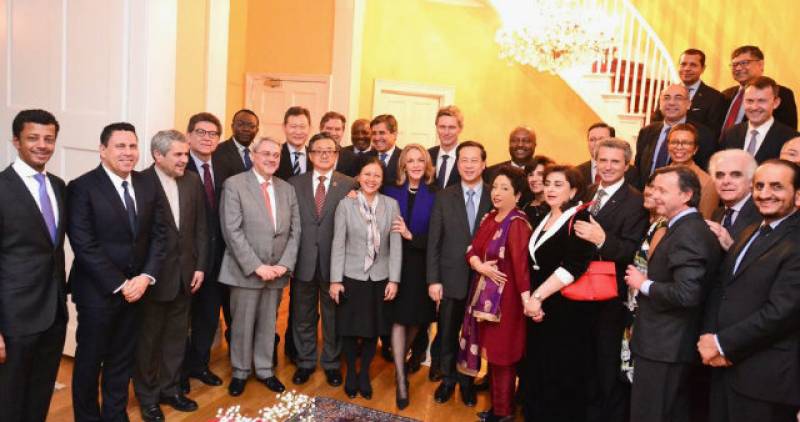 The event was attended by over 30 ambassadors from all regions of the world.

It was a pleasure to meet Ms. Rosemary Kayess, Australian candidate for the United Nations Committee on the Rights of Persons with Disabilities (CRPD) along with my good friend Gillian Bird, PR of Australia @AustraliaUN pic.twitter.com/Up4XeZrq49

It was an honour for us to have UN Under Secretary General Liu Zhenmin of the UN Dept of Econ and Social Affairs join us at Pakistan House for my welcome dinner for the new Chinese PR Ma Zhaoxu pic.twitter.com/xgF1xJZDOM

From last evening , at my dinner for our new Chinese colleague at the UN Ambassador Ma Zhaoxu. pic.twitter.com/6nGKxwBSJ6

Former foreign ministry spokesman and Chinese ambassador to Australia Ma Zhaoxu follows in the footsteps of Li Baodong, who became Beijing’s top envoy in Geneva in 2007 and then transferred to the New York post in 2010 after two and a half years.

Ma, 54, returned to Beijing last week after a 20-month stint as the country’s top envoy to the UN in Geneva.

As China’s point man at the UN headquarters will be at the forefront of a more ambitious and assertive foreign policy under President Xi Jinping.

China’s UN post in New York had been vacant for nearly four months since veteran diplomat Liu Jieyi was promoted to the deputy chief of the Taiwan Affairs Office just days ahead of the twice-a-decade Communist Party leadership shake-up in October.