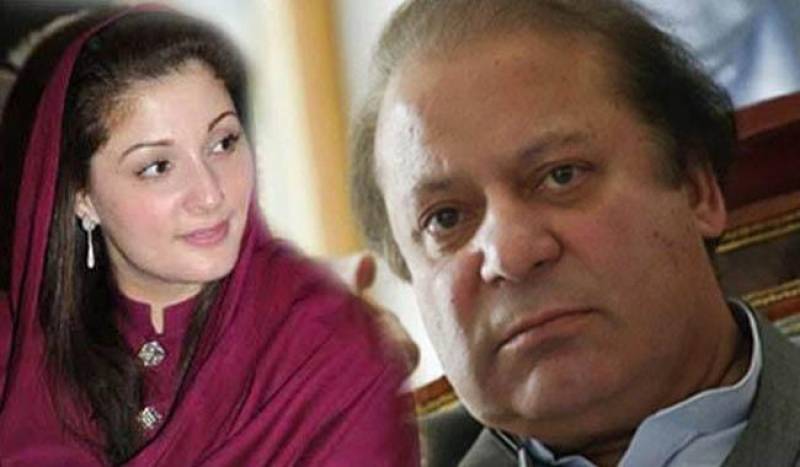 "Where is the naya [new] Pakistan? Can you see it anywhere?" he said, jibing at the Pakistan Tehreek-e-Insaf's (PTI) slogan. "Imran Khan is headed out, Pakistan Muslim League - Nawaz (PML-N) will solve all the issues of KP citizens."

Although the PML-N is believed to be popular in Hindko-speaking Hazara division, its political position is not that strong in the Pakhtun-dominated areas, including Peshawar, due to its failure to execute mega development schemes.

Despite these concerns, the PML-N drew a large crowd in Peshawar today, where roars of "Go, Imran, go," rumbled through attendees.

Both PML-N leaders were critical of the PTI government which, they told the crowd, had been unable to fulfil many of its promises.

Without naming Imran, Nawaz Sharif said the man lies 'day and night' yet he has become 'sadiq [truthful] and ameen [honest].'

"I salute the people who have declared him sadiq and ameen," he said.

Nawaz also questioned the development and administration of the province in his address.

"KP does not even have a forensic laboratory or else cases like Aasma's would not have been dealt the way they were," he said, referring to a recent rape and murder of a four-year-old girl in Mardan.

The KP government had taken assistance from the Punjab Forensics Laboratory to trace the criminal through DNA testing.

Addressing the participants, Nawaz said that the people have shown that they do not accept the decision against him.

"Today you have told that the decision against Nawaz is unacceptable, time is changing and will change," he said.

She added that the people of Peshawar have declared Nawaz honest and truthful today.

Maryam began her speech by offering condolences to the Pakistan Army officials martyred in a suicide attack in Swat on Saturday.

Taking a jibe at the ruling party of the province, Pakistan Tehreek-e-Insaf (PTI), she asked where the 'change' is, referring to the party's slogan.

"Nawaz will roar in the elections," she said, and asked the participants of the rally to promise that they will take 'revenge' for the violation of their vote by voting for PML-N in the general election.

Earlier, the former premier was at the residence of provincial party chief Amir Muqam, where he chaired an informal meeting with PML-N provincial assembly members.