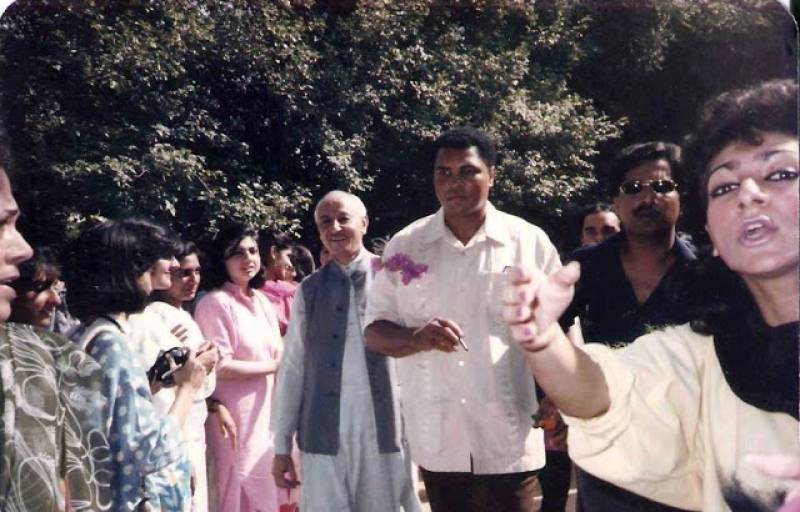 LAHORE (Web desk) - The late boxing legend great, Muhammad Ali, visited Pakistan in 1988 and during his trip he specially went to the shrine of Hazrat Data Ganj Baksh and prayed for the Muslim world and Pakistan's success.

According to local media reports, the world-renowned boxer also laid a floral wreath at the grave of Sufi saint Ali Hijveri, offered Fateha and remained there for some time.

A rare picture of the boxing icon with late film star Sultan Rahi during his visit to Pakistan, is also circulating on social media.

During his visit to Lyari, Karachi, the boxing legend met Pakistan's boxing great Jan Muhammad Baloch, who died in 2012.

The boxing king passed away on Saturday in a US hospital after prolonged illness.

The 74-year-old former heavyweight world champion was hospitalized on Thursday with a respiratory issue, which US media reported was complicated by his Parkinson’s disease.

The three-time heavyweight champion, who retired from the ring in 1981 after a defeat to Trevor Berbick, has been hospitalized multiple times in recent years.

He spent time in hospital in 2014 after suffering a case of mild pneumonia and again in 2015 for a urinary tract infection.

Nicknamed “The Greatest”, Ali retired from boxing in 1981 with a record of 56 wins, 37 by knockout, and five losses. Ali’s was diagnosed with Parkinson’s about three years after retirement.